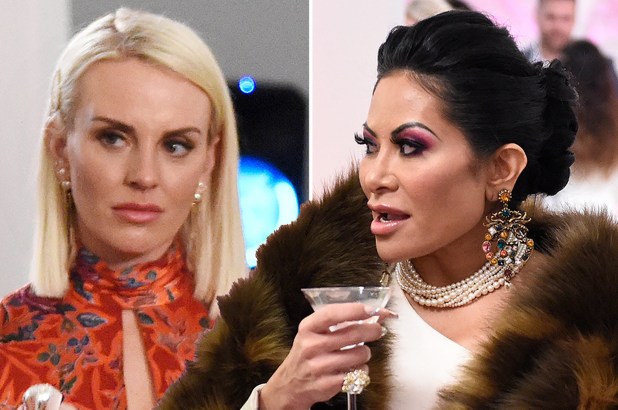 Whitney Rose believes Jen Shah is the “fakest” among her “RHOSLC” castmates.
Bravo

Whitney Rose’s relationship with her “The Real Housewives of Salt Lake City” co-star Jen Shah is icier than ever.

Rose, 35, branded the embattled Bravolebrity the “fakest” among the “RHOSLC” cast during a recent game of “Sip or Spill” with “Entertainment Tonight.”

Though she first declined to mention Shah, 47, by taking a sip from her glass of Vida tequila, Rose couldn’t help but name her nemesis, whom she memorably feuded with in Season 1.

Shah — who has been accused of running a multi-state telemarketing scheme — was not present.

The shade toward Shah didn’t end there, though. Rose, Gay, 48, Barlow, 45, and Marks, 49, also awarded her the following titles: “longest to get ready in hair and makeup,” “spends the most money,” “biggest gossip” and “gets the most work done,” among others.

Asked who “has the most secrets,” Marks quickly replied, “Well, given everything that’s unfolding, I’d have to guess Jen Shah.”

Cameras were rolling when Shah got cuffed by federal agents in March. In an extended preview clip for Season 2 of “RHOSLC,” the polarizing TV personality makes an abrupt exit from a group scene after telling Gay, “I have some bad news. I just got a phone call, and I need to go.”

The teaser also included footage of federal agents showing up at Shah’s house to take her into custody.

“I have the f–king chills,” Barlow says at one point in the clip. “Her and [assistant] Stu [Smith] were charged for stealing people’s money.”

Shah and Smith, 43, were arrested for allegedly ripping off hundreds of victims in a telemarketing scam spanning over six states for nearly a decade.

At the time, Page Six reported that producers were eager to lean into Shah’s legal woes in Season 2.

“It’s rare that Bravo has a big hit like ‘RHOSLC’ on its hands right out of the gate, and the team hoped to continue that momentum when production for Season 2 began. Now, with the news of Jen’s arrest, they are sure to have even more success than they imagined,” a source said.

From No Doubt to ‘The Voice’: Gwen Stefani’s Transformation Is ~Hella Good~ — Check Out the Pics!