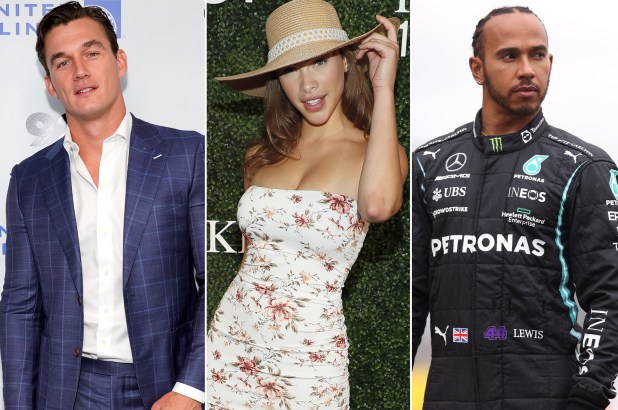 Camila Kendra is not racing to find love again just yet.

The model denied rumors that she is dating race car driver Lewis Hamilton after her recent split from “The Bachelorette” alum Tyler Cameron.

“Camila and Lewis are absolutely not dating. They are just friends and nothing more,” her rep said in a statement to Us Weekly Tuesday, adding that the online speculation is “100 percent” false.

Kendra raised eyebrows earlier this month when she posted photos to Instagram in what appeared to be Hamilton’s house. Eagle-eyed fans also noticed that she was wearing a flannel shirt that the Formula One champion, 36, was once photographed in.

However, the shirt actually belonged to Cameron, 28, and the photos were taken a while back when he and Kendra spent some time at Hamilton’s abode, a source told Us Weekly.

“She was not staying alone with Lewis at his house,” the source added.

Page Six reported on Aug. 9 that Cameron and Kendra had split after eight months of dating.

“Things took a turn,” a source told us at the time, noting how the reality star had called Kendra his “soulmate” on TV only days earlier.

Following their breakup, the former couple unfollowed each other on Instagram. Kendra also unfollowed her ex’s brother Ryan.

Cameron is best known for his stint on Season 15 of “The Bachelorette,” where he dated lead Hannah Brown. He was also linked to model Gigi Hadid in 2019.

Hamilton, for his part, was in an on-again, off-again relationship with Nicole Scherzinger of the Pussycat Dolls from 2007 to 2015.

Shawn Mendes Reminisces About the ‘Summer of Love’ in New Video

Bethenny Frankel snaps unfiltered underwear selfie: ‘This is me at 50’