Ayra Starr is having her face beat into oblivion for a photoshoot — a makeup artist hovers over her while we speak on Zoom. Unbothered, the 19-year-old musician proceeds to meditate on the beauty and calamity of being young. “You’re allowed to make mistakes,” she says, with expressive hands topped by long, crystal nails. “You get a pass.” In turn, though, Ayra says people don’t take teenagers seriously. “They feel like, ‘oh you’re a child, you’re too young, and it’s like, we’re all in this space together,” she says. “We’re all suffering the suffer together.”

She doesn’t shy away from that suffering on her debut album, 19 and Dangerous. Armed with delicate yet sturdy vocals, the Lagos-based singer spins heartfelt tales of life’s fleeting and uncontrollable nature, of it’s devastating heartbreaks, and of choosing to thrive in spite of them. On “Lonely” she reminds a cruel boy that she’s human and on “Snitch” she threatens to put another on front street through tweets, but on “Bridgertn,” she manages to “Twerk on [her] throne” anyway.

Born Oyinkansola Sarah Aderibigbe, she chose the stage name Starr because she knew what she could be. Then she chose the Arabic name, “Ayra,” meaning honorable and respected. She tells me that she came up with the title for her latest album, 19 and Dangerous, two years ago and held on to it. “It’s not literal; I don’t have a gun,” she says playfully. “Musically, I do.”  Released last week, the record speaks to Ayra’s undeniable power, something she wields with caution and confidence.

Raised between Benin and Nigeria, Starr is dedicated to preserving African rhythms and language in her work. She sings in English, Pidgin English and Yoruba. Starr says that she often writes songs with her brother Milar, and her lyrics have a poetic flair, compelling in both syntax and musicality. Her music is as fun to read as it is to dance to. On the mystic and percussive “Bloody Samaritan,” she sings: “I see you watching my movement/This bad bitch bad every day.” The slinky beat marches more briskly than Ayra was used to, she says. Her songs often have brighter, more mellow production, even when they’re upbeat, so she sat with the “Bloody Samarian” file for roughly five months before impressively rap-singing over it.

Otherwise, things have been moving quickly for Ayra. She started recording with the storied Nigerian producer Don Jazzy the day they met in December of 2019. Even that encounter occurred at a breakneck pace. Jazzy reached out to Starr just three hours after she posted an original song, “Damaged” (now called “Toxic” on her album). By June of 2020, she signed to his label, Mavin Records. She released her first EP in January, roughly a year after her first studio session. “Oh my god, I was so nervous,” Ayra says of her first encounter with Don Jazzy, a reminiscent smile creeping across her face as her makeup artist brushes her eyelids. She brought her brother with her to Mavin’s Lagos office and studio. “We were waiting, just by the gate. We would make Snaps. We were just jumping. We were so nervous.”

Don Jazzy has been the force behind Afrobeats hits, like D’Banj’s G.O.O.D. Music crossover “Oliver Twist,” since 2004. Since establishing his Mavin in 2012, he’s aided the rise of African acts Tiwa Savage, Ladipoe, and Rema. In 2019, the independent label earned millions from private equity investors wanting to cash in on Africa’s musical growth.

“I remember when Jazzy would leave the studio, my brother and I would just be shouting, like, ‘Yay, we did so good!’ Then, he would come back and we would pause and go back to normal.” As Mavin’s latest addition, Ayra feels championed by the label. “It’s not this business establishment like we think it is,” she says. “It’s just family.”

The family Ayra grew up with is a cornerstone of her musical ability. Her mom is a former singer and she has an aunt who rapped. The women would covertly coax her and her siblings into songwriting competitions. “We didn’t even know that’s what it was then,” says Ayra. Her mom and aunt would give the kids an hour to come up with something and a word to start them off. By ten, Ayra was imagining whole albums.

After starting college at 14, she continued to pursue music at her mother’s behest, even though she started to become cognizant of gender imbalances in the West African music industry. She says she saw ​​the way men in some parts of the region could sing of vices and challenges that wouldn’t be tolerated in women’s lyrics. She thought of becoming her brother’s manager rather than a star herself, but her mom encouraged her to still upload videos of herself performing online and, well, by now you know how that turned out for her. 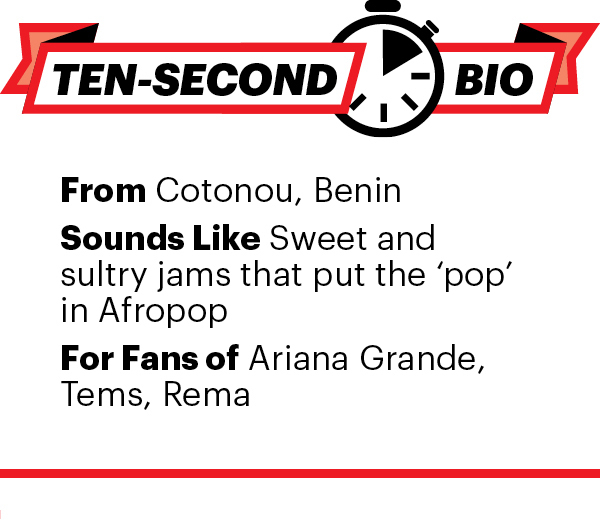 While there aren’t any women she looks to as mentors or guides in industry yet, she’s inspired today’s Nigerian artists like Tiwa and Aṣa, and she looks backwards to the Lijadu Sisters, a funky, political act who, from the Sixties to the Eighties were rare female frontwomen in the country. She also channels Eartha Kitt, who she stumbled upon via Google. “I remember when I started properly writing music, I didn’t have a lot of African young musicians to look up to that were female, so I would go to Google and just search. I also wanted to know, ‘who were people listening to in 1960? What were people listening to in 1970?’ And I would check that, and I would see Eartha Kitt.” The 19 and Dangerous album opener “Cast (Gen Z Anthem)” samples advice Kitt offered in a 2001 interview on freedom of expression.

Ayra says she’s faced “mild” challenges as a young woman in music that she’d rather not dwell on. “I’m going to build my own stage. If no one thinks I’m good enough, because I’m this, I’m that, I’m just going to do my own thing,” she says. “I’m trying to not let it bother me.” She wants to inspire Black girls to feel strong, and moreover, inspire her generation to chase personal freedom relentlessly. “I can’t wait to see more women doing music,” says Ayra. “I can’t wait to see more women in leadership positions.”

When she thinks about where she’s headed, Starr rattles off a list of goals. “I want to learn how to write better. I write amazingly, I know, but I want to get better. I want to record myself. I want to learn production better. I want to perform better,” she says. “I will keep finding myself, and I’ll learn things about myself I want the world to learn too, and I’ll try to teach it through my music.” She admits that she has a long way to go, but her foresight, drive, and talent make her a dangerous woman, indeed.

Jessa Duggar Reveals She’ll Be Giving Birth in a Hospital Amid 4th Pregnancy: It Will ‘Be Different’