The rapper 454 talks with a respectful cool, like the zenned-out busdriver Otto from The Simpsons. On a recent Zoom call, he punctuates sentences with an enthusiastic “Yeah, man.” But while the New York-by-way-of Florida MC makes the kind of lush, atmospheric music a stoner like Otto might appreciate, there’s nothing careless about his approach.

Born Willie Wilson, 454 matches his ethereal production with a flow that’s equally rooted in clouds of smoke and real emotion. His debut, 4Real, arrived in March and presented a fully realized vision of an artist firmly in his element. On standout track “Andretti,” he’s effortlessly clever, delivering thoughtful barbs with serene detachment: “Polo from the old age, feds know that it’s no case/We sped like road rage, new puffer for cold days,” he raps.

The 24-year-old musician got his start making beats in Longwood, Florida, a suburb of Orlando. He says he was first inspired by the pitched-up squawk of Madlib’s alter ego Quasimoto. Similarly, 454’s music modulates pitch and tempo to hypnotic effect. His songs have a way of transporting the listener into a different state of mind, not unlike the proto-ambient work of the late DJ Screw.

“In Florida, they have this fast-paced thing they do….This is the opposite of what DJ Screw did. It’s quicker,” 454 explains. “I was trying that with different melodies, because I just didn’t really like the way my voice was sounding. I felt like speeding it up. It just made me enjoy it more.” 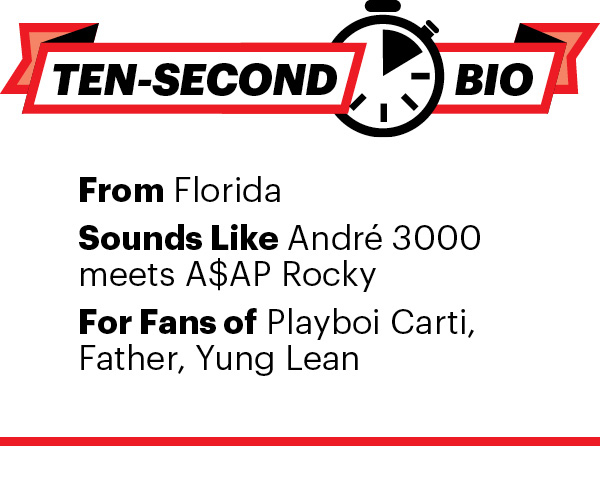 Despite his misgivings about his own voice, there’s a poignant vulnerability at the core of 454’s music. As he tells it, his childhood was characterized by change and tragedy: In 2008, his father was shot, and some months later he passed away. What comes through most prominently in the songs is a sense of emotional clarity. “I lost my pops in 2009, my heart that shit cut right through/My people you ain’t blind, open your eyes, see what we going through,” he raps on “Late Night.”

The time leading up to the loss of his father had already been one of changing circumstances. “Around that time, things really felt different, because we had always lived in an apartment complex and we moved to a house, so we had to maintain it. I was cutting grass and stuff like that,” 454 says. “Then, over the next year or two, things changed.”

Afterward, 454 says he turned to skateboarding as a way of coping: “I didn’t really know how to deal with it, so I just was skating a bunch around that time.” At the same time, music was always in the background. As he progressed at skateboarding — earning frequent features in skate magazines like TransWorld — he kept up with his passion for producing. One YouTube comment on an early skate clip of his was equally impressed with his musical ability and his skating: “A beast producer and a great part!”

454 credits his parents for his persistent interest in music. “We would take road trips and listen to CDs,” he says. “Just the older stuff, like Al Green and Mary J. Blige. It always stuck with me, I think because it was the happy memories. And then over the years, once I got on YouTube, I was able to just go far.”

He began rapping as part of a group with his sister and a cousin in his teenage years. As recently as 2016, it was still a loose pursuit. “I was just doing little songs for the homies. Just little skate songs or whatever,” he says.

Not long after, he moved to New York with his girlfriend. The move wasn’t for any particular reason, he says, but more for a change of scenery. They initially planned to be in the city for a few months, but stayed on after finding jobs; 454’s was at the Alife store in Lower Manhattan, an influential streetwear hub that recently announced its closure after 20 years.

The city’s fast pace helped motivate 454 to get more invested in making music. “I feel like once I got here, the stuff that I started to make was so different, because things are much quicker here than they are in Florida,” he says. “With just that alone, I had my head in different spaces, because I wasn’t having the same amount of time to create as I did in Florida. I had to get a job and things got real.”

He got a modest studio setup going around this time, and began tinkering with new ways to make beats for himself to rap over. “I bought some monitors and a microphone and just started doing little demos and making things,” he says. “I kept buying new equipment, just to keep me excited about it and learn how to mix and produce for myself.” His signature sound developed from there: Each track’s first half is pitched up, giving 454’s voice the feel of a sped-up cassette. The second half is slowed to a more comprehensible pace. You end up hearing the song twice, but it’s never redundant. 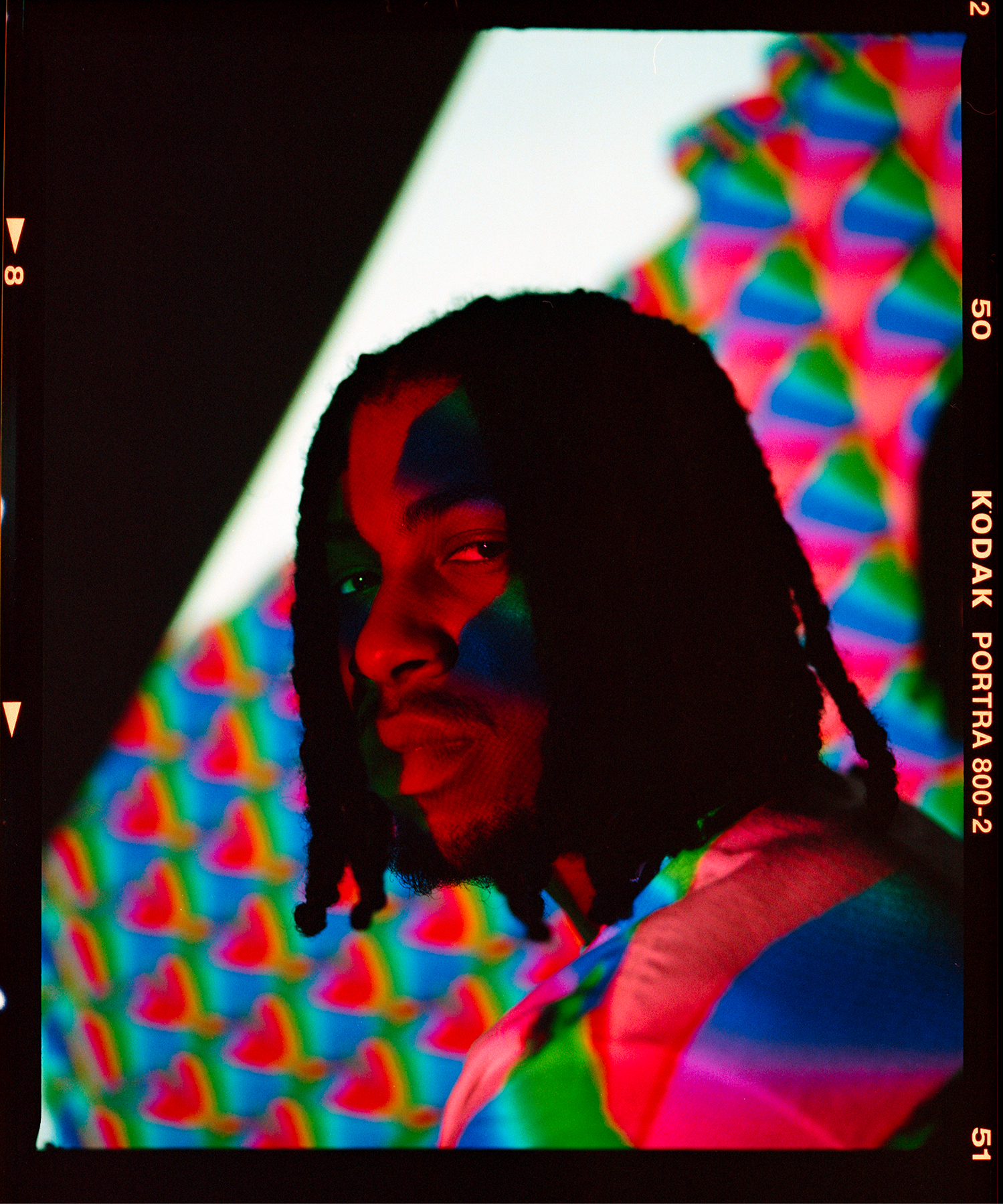 454 finished his debut album after heading back to Florida in early 2020. “That was a crazy time, and it made me think a lot.”

It was around the start of last year, just before the pandemic threw everything into chaos, that 454 started working on 4Real. Just as New York locked down, he and his girlfriend drove back down to Florida, figuring it would be their only chance to go home if things got worse. Back in his home state, 454 focused on finishing the project. “That was a crazy time, and it made me think a lot and pushed me to work on music more,” he says. “It was unbelievable, but I feel like it had its ups and downs.”

As a songwriter, 454 is gifted at approaching emotion with a gentle touch. He hovers around a feeling, careful never to overwhelm. On “Heaven,” he raps tenderly about his girlfriend, who moved to New York with him somewhat on a whim. “Baby, come on over, come cry on my shoulder/We’ve been down for so long, my rock just like boulder.” There are autobiographical snippets peppered throughout the album, though the way he raps them, they come across universal. “A lot of the times the stories are super-vague, and you got to dig deep into the lyrics a few times to resonate with it,” he says. “I try to do that with memories I have, or situations I feel like a lot of people would go through from day to day.”

4Real arrived, like so many good projects over the past year, amidst a backdrop of death and despair around the world, but 454 isn’t discouraged. He’s managed to carve a lane for himself and fans are starting to take notice. For now he’s grateful for the progress he’s made. “I just want to sit down now and just get better at music,” he says. “I just hope that everything with Covid can be settled and we can move on, because I feel like everybody’s ready now.”

Casey Anthony’s Neighbors Want Her ‘Out’: Families Are ‘Terrified’

Jennifer Aniston’s 1998 Interview with David Letterman Has Resurfaced, and Viewers Are Horrified