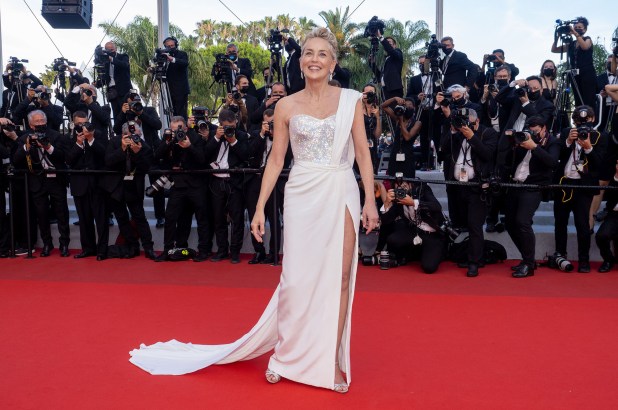 Sharon Stone ruled the red carpet on the final night of the Cannes Film Festival.

The 63-year-old actress oozed glamour in a white Dolce & Gabbana gown — featuring a high slit and body-skimming silhouette — at the festival’s closing ceremony and screening of “OSS 117: From Africa With Love.”

Stone looked every bit the queen of the red carpet that she was — waving to fans and blowing kisses to the crowd with a wide smile that never seemed to leave her face.

“Sharon – the older she gets, the more beautiful she shines,” one fan wrote on Twitter after Stone shared the details of her look.

“Stunning spirit shining through a beautiful body,” another commented.

Stone is “definitely having a hot girl summer,” a source told Page Six earlier this month.

The Hollywood icon has been wowing fans with her fashions — including a statement-making floral Dolce & Gabbana gown at another Cannes event and a yellow bikini — as well as her personal life.

As Page Six recently revealed, the star has been “hanging out” with 25-year-old-rapper-RMR — though he wasn’t seen at Cannes with her.

“They’re enjoying each other’s company right now and hanging out,” a source told Page Six. “They’re having a great time together.”

At Cannes, Stone co-presented the Palme d’Or — the biggest award at Cannes — to the film “Titane,” after legendary director Spike Lee mistakenly revealed the winner earlier in the evening.

The best facial sunscreens just in time for summer

Talking To Jimmy Smits Will Make You Feel Better About Everything, Really

The Beginner’s Guide to Acrylic Nails

The 2021 Met Gala will require guests be vaccinated, masked indoors

Rihanna is a billionaire and named the ‘richest female musician’