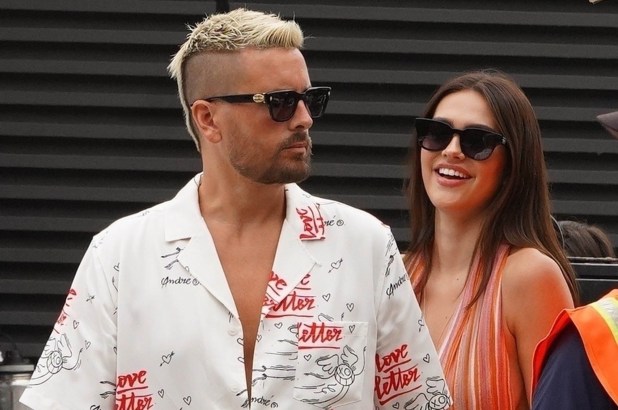 Scott Disick and Amelia Hamlin are spending time with his kids.
BACKGRID

Disick, 38, shared a couple of photos from his Friday night out with Hamlin, 20, and at least two of his kids — Reign, 6, and Penelope, 9. One photo showed Disick and Hamlin posing at the end of a dock together with Reign next to them, pinching his nose shut.

“Great night just a little smelly for reign out on these old docks,” Disick, who shares three children with his ex-girlfriend, Kourtney Kardashian, wrote across the photo on his Instagram story.

In another photo, Disick showed his daughter, Penelope, dressed in all pink while sitting on the hood of a Mercedes SUV. The only one missing was Disick’s oldest, Mason, 11. It’s unclear if he was present for the “family” outing.

The date night comes not long after it was revealed Amelia’s father, Harry Hamlin, is bothered by their relationship.

“The issue that’s most enduring is the age difference, which to me is odd,” Hamlin said on the July 7 episode of “The Real Housewives of Beverly Hills.”

However, he added that he was once in a similar relationship with ex Ursula Andress — there was a 14-year gap between them. Hamlin’s first born son, Dimitri, was born when he was 29 and Andress was 44 in 1980.

Disick defended his relationship with Hamlin, whom he started dating in Nov. 2020 when she was just 19 years old, during the “Keeping Up with the Kardashians” reunion in June.

“Everybody gets this wrong — that I look for young girls,” Disick told Andy Cohen during the taped reunion special. “I don’t go out looking for young girls.”

He added, “They happen to be attracted to me because I look young. That’s what I’m telling myself.”

Prior to his newfound romance with Hamlin, Disick was in a relationship with Lionel Richie’s daughter, Sofia Richie, for nearly three years. The couple started dating when Richie was just 19 years old.

Mel B on her abusive relationship: “Choices were taken away from me for so long”