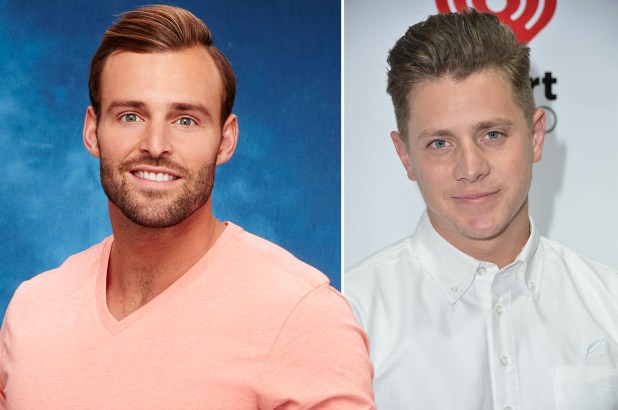 Robby Hayes is breaking his silence after his former roommate, Jef Holm, filed and then dropped a restraining order against him over allegations of harassment.

The “Bachelorette” alum exclusively told Page Six on Tuesday that he is the victim, claiming that Holm “harassed, physically abused, and threatened him.”

He also claims his ex-roommate’s restraining order left him and his dog homeless.

Hayes, 34, told us via email, “Just imagine, coming home from a four-day work trip and your roommate, Jef Holm, who’s actually been the one harassing, physically abusing, and making threats of violence and throwing your personal belongings to the curb has broken down the door to your room, moved all your stuff out, and changed the locks.”

He continued, “Then, in an attempt to keep you away from your home, files a … legal document to get a restraining order in place where you couldn’t even step within a 100 yards of the place you’ve called home for 4.5 years, leaving you and your puppy homeless.”

Some of Holm’s allegations against Hayes were that he would “abruptly and aggressively started threatening me,” making Holm feel “very unsafe.”

“He yelled at me and threatened me,” Holm, 36, alleged in the Aug. 9 filing, adding, “He continues to enter the premises and harass me and I do not feel safe around him.”

According to Los Angeles Superior Court records obtained by Page Six, the restraining order Holm filed against Hayes was dismissed on Monday due to “lack of prosecution” because Holm reportedly never showed up to court.

“Jef Holm completely disregards other people’s feelings, well-being or the consequences of his actions,” Hayes added. “I just want to be able to feel comfortable in my own home without feeling like I can’t leave my room for concern for my own safety.”

Holm first invited Hayes and his pal, Chase McNary, to move in with him in 2017 after the trio became reality stars by appearing on the “Bachelor” franchise. Holm won Emily Maynard’s season of “The Bachelorette” and Hayes came in second on JoJo Fletcher’s season.

Hayes explained to Page Six why he previously hesitated to address any of Holm’s allegations to the press.

“I’ve delayed my response to the media because of this concern for my safety and the safety of my belongings,” the former competitive swimmer said.

Holm did not immediately return Page Six’s request for comment on Hayes’ allegations.

However, the “Bachelorette” alum told E! News following his restraining order’s dismissal, “I haven’t seen any reason to continue with the restraining order, so I dropped it. Like I mentioned before, I wish him the best.”

Kate Moss is reportedly working to become a tattoo artist

How to Use a Clarifying Shampoo

Disney+ Will Now Release Original Series On Wednesdays (Following The Example Of ‘Loki,’ God Of Mischief)