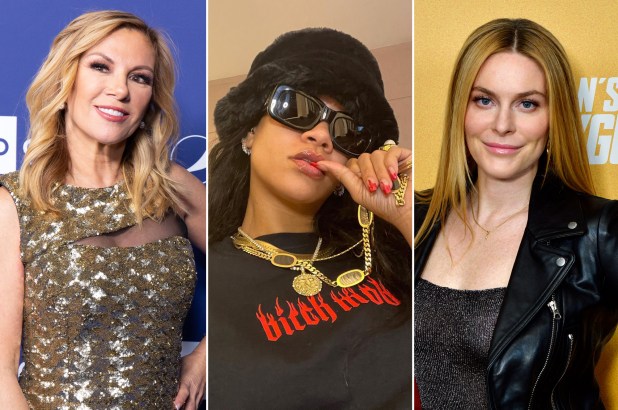 Rihanna posed in a Married to the Mob T-shirt on Instagram after Leah McSweeney name-dropped her in an argument with Ramona Singer on an episode of “Real Housewives of New York.”
Getty Images ; Instagram

The bad gal is a known Bravo fanatic who follows her favorite stars on social media, and occasionally weighs in on various “Real Housewives” happenings.

And sometimes, she even gets name-dropped in an episode.

On Tuesday night’s “Real Housewives of New York,” a fight broke out between Ramona Singer and Leah McSweeney; the former sarcastically quipped that she would promote the latter’s brand, mistakenly calling Married to the Mob “Leah Mob” or “Mob, Something.”

McSweeney replied, “You’re not exactly my demographic, so it’s all good. I already have Rihanna wearing my s—t, I don’t need you wearing my s—t.”

Streetwear aficionado Rihanna, whose friendship with McSweeney extends so far back that she even included an old photo with the star in her 2019 coffee table book, chimed in and declared her loyalty to the young fashion mogul.

McSweeney reposted the shot to her own Instagram, writing, “Yup @badgalriri is a woman who supports women @marriedtothemobny And she’s also watching and enjoying #RHONY Season 13 😭❤️‍🔥.”

However, Singer wasn’t deterred by Rihanna’s shade; the Upper East Sider even reposted the clip herself.

Perhaps all will be resolved with a Fenty x Married to the Mob collaboration — modeled by Singer, of course.

Everything to Know About Gua Sha Facial Massage

Naomi Osaka Knocked Out of Olympics After Upset Loss