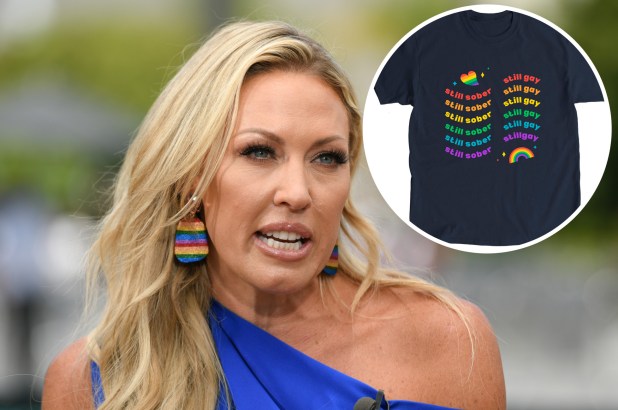 Braunwyn Windham-Burke may no longer be a “Housewife,” but she’s still got a tagline.

The rainbow-colored T-shirts are available for $24 each, with the sales benefitting the PFLAG Newport Beach scholarship fund for queer youth.

Windham-Burke described herself as “still sober and still gay” in an explosive text message exchange with Dodd, 45, earlier this week after they were both fired from “RHOC” along with Elizabeth Vargas.

While all three made amicable public statements about the shakeup, Dodd publicly shared the texts between herself and Windham-Burke, in which the former blamed the latter for both of their exits.

“This was your fault,” Dodd told her former co-star, per her Instagram post. “We’d still be on the show if you didn’t make things so dark and ugly and brought all that political ‘woke’ BS.’”

Dodd added, “Your lies about me, calling me a racist and a homophobe were horribly destructive and your phony storylines didn’t help either.”

In addition to other choice words, Windham-Burke responded by calling Dodd “wildly immature” and “bitter.”

“You just have to laugh at this point — only Kelly Dodd would post screenshots of her own texts that make her look wildly immature,” she told Page Six. “I guess that’s what being bitter is like.”

What Streaming Service Offers The Best Options This Weekend?