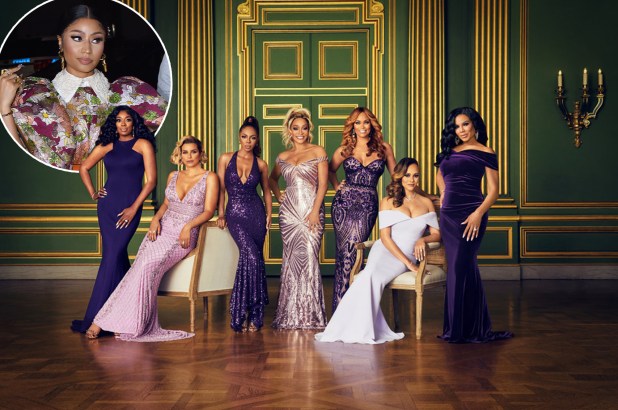 The “Super Bass” rapper, 38, teased that she wants Andy Cohen to hand over the hosting baton for the next “Real Housewives of Potomac” reunion.

Minaj posted a trailer for the Bravo reality show to her Instagram Thursday, set to a remix of her 2010 hit “Moment 4 Life.” She joked in the caption, “I’ll be hosting the reunion. lmk what y’all want me to ask chile.”

“yes ma’am,” Minaj responded, per Comments by Bravo. “I know a thing or 2 about being the Grand Dame.”

At first, the Grammy nominee did not know what “Drive Back” was, but after the “WWHL” account explained, she did not exactly seem interested.

“It’s a nice song,” she replied. “But @ the reunion ima have to get into some thangz with sissy. Cuz chiiiiile.”

Minaj wrote that she is also ready to “get into some thangzzzzz” with OG “Housewife” Gizelle Bryant, who didn’t seem to mind.

“RHOP” rookie Wendy Osefo got in on the fun too, writing, “Yessssss Queen 👑.”

As the host of Apple Music’s “Queen Radio,” Minaj does know a thing or two about emceeing a show — so her idea to give “the most iconic reunion of awl [sic] time” isn’t exactly far-fetched.

She is only the latest superstar to express her “Real Housewives” fandom.

Earlier this week, Rihanna took Leah McSweeney’s side in an argument with Ramona Singer, who dissed McSweeney’s Married to the Mob clothing line.

SI Swimsuit model had ‘no clue’ she was pregnant during shoot

James Gunn Has Responded To Claims That ‘The Suicide Squad’ Is Being Review-Bombed: ‘I’ll Live’

A Delightfully Weird Conversation With Patrick Wilson And Vera Farmiga About ‘The Conjuring: The Devil Made Me Do It’

Hear Dua Lipa’s Moody New Song ‘Can They Hear Us’