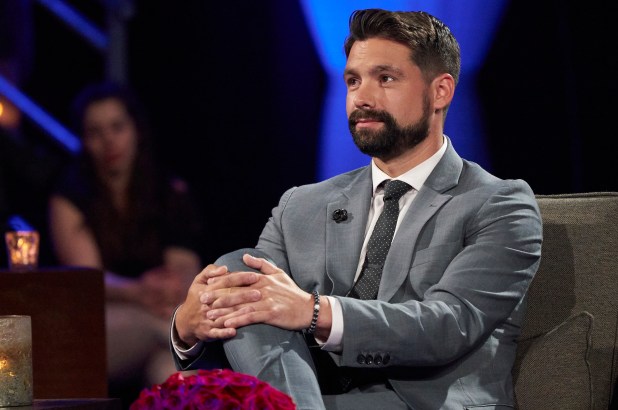 Michael Allio, seen on the “Men Tell All” special, left “The Bachelorette” to be with his son.
ABC

Michael Allio may not accept ABC’s rose — if the network presents one.

The fan-favorite “Bachelorette” contestant — who left the show on Monday’s episode to go home to his 4-year-old son, James — said he is “not sold” on becoming the next “Bachelor” if an offer comes his way.

“I literally just got my heart broken on TV, so I am trying to mend those wings,” he told People. “And I have to think about what it would be like to get engaged in and introduce someone to my son in such a quick timeframe. I’m not sold on the idea!”

Despite Allio’s resistance, fans on social media are rallying for the single dad to get the gig.

“if Michael isn’t the next bachelor i don’t want it,” one fan tweeted.

“I have never watched The Bachelor but I would watch the s–t out of a Michael A season,” another person wrote.

But others said they couldn’t imagine Allio becoming the “Bachelor” because it would mean time away from James.

“Yall realize Michael cant be the bachelor for the same reason right?? Bc of James..unless he can come with his dad,” one fan wrote on Twitter.

Other fans, meanwhile, are rooting for castoff Andrew Spencer to nab the “Bachelor” gig.

On Monday’s show, Allio bid farewell to “Bachelorette” Katie Thurston just before the all-important hometown dates — where she would have met his family.

The Ohio business owner made his decision after a devastating FaceTime call with his son. During the call, James wondered if his dad wasn’t home because he didn’t want to see him.

Allio lost his wife, Laura, to cancer in 2019 and has been raising James on his own.

On Monday’s “Men Tell All” special, Allio said he made the right decision in exiting the show but that his feelings for Thurston hadn’t changed since production ended. Thurston, on the other hand, said on the special that she was happy with the way things ultimately played out after Allio left — despite their strong connection on the show.

The Creative Minds Behind ‘Mr. Robot’ And ‘Palm Springs’ Are Teaming Up For ‘The Resort,’ A Dark Comedy Series For Peacock

Watch Billie Eilish Perform ‘Happier Than Ever’ on ‘Fallon’