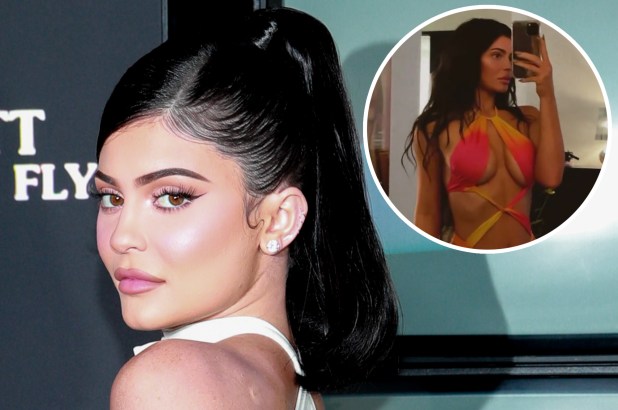 From swimwear selfies to sales.

Kylie Jenner, 24, confirmed she’s launching a swimwear line, teasing the collection with a series of Instagram Stories on Monday.

She snapped a mirror selfie in a skin-baring one-piece, writing, “working on @kylie swim and i can’t wait to share.”

The collection appears to include a range of sunset-hued styles, as she also shared an “on set” peek at Polaroids of the line, before snapping a closeup of herself in an orange cutout one-piece.

The makeup mogul tagged Kylie Swim’s official Instagram throughout — which, despite having no posts yet, already boasts 113,000 followers and counting.

The profile also features a possible logo for the collection, which reads “Kylie Jenner” in a retro font, using a similar pink-and-orange color palette.

A release date for the line has yet to be announced, and the brand’s bio simply reads, “Coming soon…”

Jenner first hinted at a move into swimwear in May, when she filed legal documents to trademark both “Kylie Swim” and “Kylie Swim by Kylie Jenner.” The applications cover accessories like sunglasses, backpacks and towels, in addition to bikinis, cover-ups and footwear.

In addition to Kylie Swim, Jenner announced in May that she’s launching a baby brand named — what else? — Kylie Baby.

The beauty mogul also filed to trademark “Kylie Body” and “Kylie Hair” in 2019, although she’s yet to cash in on categories outside of her eponymous skin and cosmetics brands.

‘The White Lotus’ Was A Pineapple Suite-Sized Hit For HBO

Tristan Thompson ripped for giving advice about ‘improving your life’