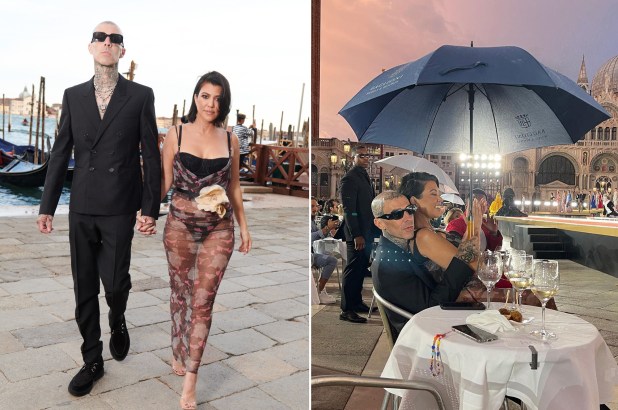 Kourtney Kardashian and Travis Barker are enjoying the dolce vita.

The couple made a stop at the Dolce & Gabbana Alta Moda fashion show during their steamy Italian vacation on Sunday, relaxing at a table in the front row next to Kris Jenner and Corey Gamble.

Kardashian, 42, wore a sexy sheer midi dress with black undergarments while Barker, 45, sported an all-black suit sans shirt for the show, which featured tons of celebrity offspring as models, including Leni Klum, Emmeline Bale and twins Jessie and D’Lila Combs.

While a rain storm hit Venice’s St. Mark’s Square, the Blink-182 rocker held an umbrella over his lady love as she cuddled up in his lap until a rainbow shone through for the star-studded crowd, which Kardashian captured in her Instagram Stories.

Earlier in the day, the couple were spotted walking the streets of Venice, holding hands and wearing coordinated outfits. The duo started off their vacation — which is just Barker’s second time flying on an airplane since his near-fatal 2008 crash — with a PDA-packed boat ride that they documented on social media.

Netflix’s ‘Cocaine Cowboys: The Kings Of Miami’ Will Introduce You To The Speedboat Champion Drug Lords Of South Florida

Top Chef Power Rankings, Week 9: The Dream Of The ’90s Is Alive On Top Chef

Kim Kardashian breaks down over Kanye West divorce: I feel like a failure