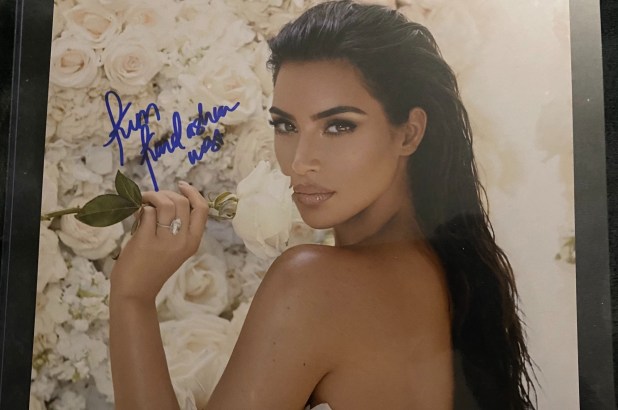 An autograph that Kim Kardashian signed for a fan using her married name.
ShotbyNYP / BACKGRID

Maybe she just likes the way it looks.

Kim Kardashian signed an autograph for a fan on Friday with her estranged husband Kanye West’s last name appended to her own.

Kardashian, 40, scribbled “Kim Kardashian West” on a glamorous photo of herself on her way out of dinner with mom Kris Jenner and sisters Kylie and Kendall Jenner at Craig’s in West Hollywood.

However, the “West” at the end of her signature may have just been a matter of brand consistency, as she was signing a promotional snap for her KKW Beauty line, which obviously uses her married initials.

The signing came just one day after Kardashian broke her silence on her divorce from West, 43, tearfully confessing in an episode of “Keeping Up With the Kardashians” that she feels like “a failure” over the dissolution of their seven-year marriage.

“I feel like a f–king failure, that it’s like, a third f–king marriage,” she said in a flashback clip, referencing her previous divorces from Damon Thomas and Kris Humphries. “Yeah, I feel like a f–king loser. But I can’t even think about that like, I want to be happy.”

Page Six exclusively broke the news in early January that Kardashian and West were headed for divorce following his bizarre presidential bid in 2020, which a source said was “the last straw” for the reality star. She ultimately filed for divorce in February.

As of April, Kardashian was “not looking to jump into” dating again — despite being courted by a roster of high-profile suitors — but she is “keeping an open mind,” a source told us.

West, for his part, has no such compunctions and has already set his sights on “an artist and a creative person” for his next match, Page Six previously reported.

The Director Of The Original ‘Space Jam’ Really Did Not Care For ‘Space Jam: A New Legacy’