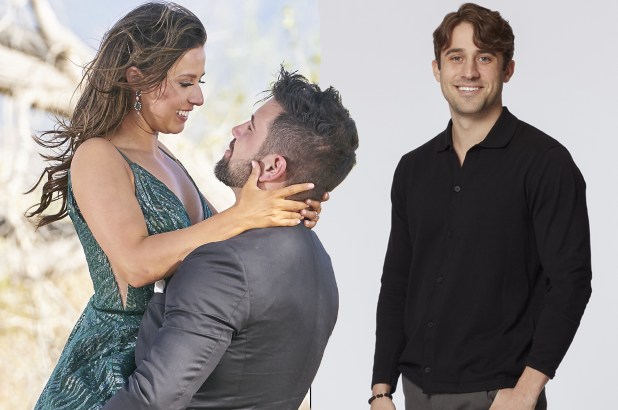 Katie Thurston, who is engaged to Blake Moynes, clarified that she is not holding onto her feelings for Greg Grippo.
ABC

Just because Katie Thurston is engaged to someone else, doesn’t mean she’s going to forget how ex Greg Grippo treated her.

“It doesn’t make sense to forget how someone mistreated me and how it made me feel just because I’m very happy and in love,” Thurston told Us Weekly, responding to internet buzz that she still has feelings for Grippo following their heated exchange on “After the Final Rose” on Monday.

“You have the opportunity to speak to someone who hurt you, you’re going to do it and you don’t really get that opportunity sometimes in real life when an ex does mistreat you,” she continued.

Thurston, who got engaged to Blake Moynes on “The Bachelorette” finale, also said the “ATFR” special is all about getting that “final closure” and that’s what she and Grippo were able to do.

“We’re ready to just close that door forever and move forward,” she explained. “You can be happy and in love in your relationship, but still be upset with how someone treated you in the past and you want to speak on it.”

Thurston, 30, added that she had been transparent with Moynes, also 30, and that they even watched the hometown dates episode — where she was left sobbing after Grippo’s exit — together.

“I was very honest with Blake leading into every single episode,” she said. “[Greg’s exit episode] we actually got to watch a few weeks ago and we watched it right before going into filming ‘After the Final Rose,’ so there was a lot of emotions that I felt that I didn’t feel in the moment with Greg.”

During their exchange following the finale, Thurston unloaded on Grippo, “You came at me and tried to make it seem like I did something so horrible that you had to leave.”

She added, “You couldn’t have just been a man and had a normal conversation instead of being so rude and dramatic and leaving without even saying goodbye?”

Thurston — who had Bachelor Nation divided over the confrontation — had seemingly accused Grippo of gaslighting her after he quit the show.

Grippo was adamant at the reunion he had no regrets, but later backtracked, admitting he acted like an ass.

“I sadly wasn’t looking at it through Katie’s lens in that exact moment. Looking back on it, watching for the second time with all the viewers, yeah it came off like an ass,” Grippo said this week. “It came off like a petulant child at times and I regret it because, you know, at the end of the day she didn’t deserve that.”

Prince Harry had a surprising reaction to the controversial royal family comedy, The Prince

Presley Gerber appears to have removed his ‘misunderstood’ face tattoo

Watch Omar Apollo’s Dramatic Performance of ‘Go Away’ on ‘Fallon’