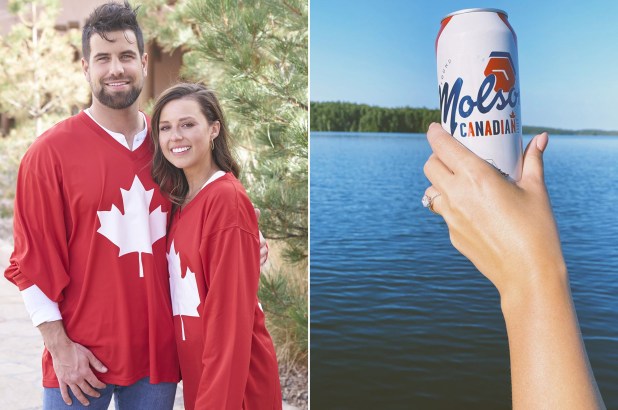 Katie Thurston and Blake Moynes are finally going on a real hometown date.

Over the weekend, the newly engaged “Bachelorette” couple documented their road trip up to Blake’s hometown of Hamilton, Ontario in Canada.

The pair began their adventure, posting photos from Niagra Falls before making their way north, where Thurston, 30, uploaded a video of herself enjoying a basket of poutine.

Moynes, 31, took took his fiancée fishing on Sunday, where she posted videos of him manning the boat and another of the sun setting over the water. Thurston also showed off her engagement ring while holding up a up a can of Molson Canadian beer.

“Just being normal together,” she wrote.

The trip marks Thurston and Moynes’ first trip together as a couple since wrapping up their post-“Bachelorette” media tour. And while normally, she would have visited his family in Canada during the hometown dates on the show, due to COVID-19 protocols, his family was brought to the resort where they filmed.

At the time Moynes’ sister, Taylor Moynes, wasn’t convinced that he was really in love based on his dating history — specifically the history he had with two former “Bachelorette” contestants.

“So this is the one now?” Taylor asked her brother. “You were so set like before you even met Clare [Crawley] you were like, ‘I love her’ … And then Tayshia [Adams] came in. You’re in love again like right away.”

Taylor dug deeper when she pointed out that Moynes hadn’t even said “I love you” to Thurston at the time.

But it all worked out because Moynes, a wildlife manager, proposed to Thurston on the Season 17 finale of “The Bachelorette,” which aired on Aug. 10.

“You deserve the world, and I’m excited to support you and be there for you every day moving forward,” Moynes said before getting down on one knee. “So that being said, Katie Lane Thurston will you marry me?”

During their media tour, Thurston revealed she and Moynes had already had sex 43 times while playing the “Newly Engaged Game” on “Jimmy Kimmel Live.” However, Moynes guessed it had only been 30 times.

The former “Bachelorette” teased upcoming animal-related projects with her fiancé while gushing over him in a recent Instagram post.

“I am now engaged to a man who shares the same passion for animals and together, we can really make an impact,” she captioned a photo of herself feeding a giraffe. “I’m excited for the upcoming projects we have planned and can’t wait to share with you all!”

Bikini-clad stars are swapping their sandals for cowboy boots

Pregnant Cardi B shows off her baby bump in colorful catsuit

Cardi B and Offset have matching camouflage Birkin bags