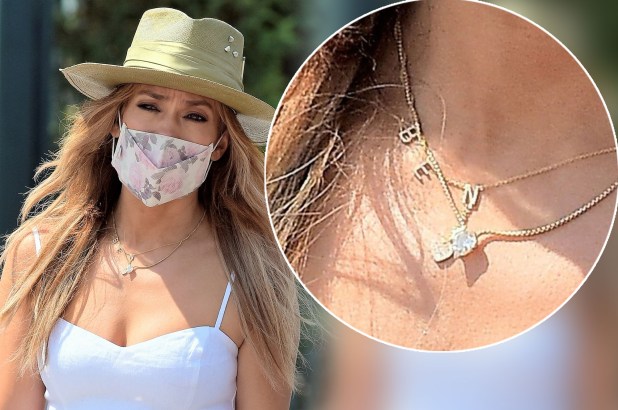 After spending her 52nd birthday with Ben Affleck, Jennifer Lopez stepped out wearing a necklace with his name on it.
Splash News

Jennifer Lopez is keeping Ben Affleck close to her heart.

After celebrating her 52nd birthday aboard a yacht in Saint-Tropez with her on-again beau, the superstar stepped out in Monaco on Monday sporting some new sparkle: a gold chain necklace that spelled out “BEN” in bold block letters.

Clad in a white linen Reformation minidress ($178), floral face mask and sun hat, J.Lo layered the piece with another pendant for the outing.

It’s not the first time she and Affleck, 48, have shown their love via jewelry: In May, the “Argo” director appeared to resurrect the silver watch he wore while filming Lopez’s 2002 “Jenny From the Block” music video with his then-fiancée, signaling that the couple were very much on again.

“Do you think he has a box with like… ‘JLo things’ and is the pink ring in there,” one person tweeted at the time, referencing the six-carat engagement ring the musician accepted from Affleck back in 2002. “The way he kept that all this time is shocking to me he must really had hope they’ll reconnect,” another said.

Bennifer channeled “Jenny From the Block” in another way over the weekend, with the actor caressing the “Ain’t Your Mama” singer’s booty while the pair soaked up some sun on J.Lo’s birthday boat.

The triple threat stunned in a $3,000 designer swim look consisting of a Valentino bikini and complementary cover-up.

Lopez rekindled her romance with Affleck in April, very shortly after she and A-Rod called it quits. Bennifer recently made their Instagram debut as a couple (again) after attending pal Leah Remini’s birthday party together.

Brad Pitt Excited for ‘Fresh Start’ With His Kids After Getting Joint Custody: ‘He’s Over the Moon’