It’s 8:30 p.m. at Madison Square Garden, and the crowd of people outside is restless. They’re here to see Dipset and the Lox’s Verzuz battle, and some members of Dipset’s entourage aren’t being allowed in. Security is telling everyone to move back, encountering issues with holding down a crowd of folks waiting to get into the media entrance. Despite the hectic scene, nobody seems too pressed. After all, when you are putting on a hip-hop event, you can expect this sort of thing — big entourages telling security about the connections they have as they try to get into the show. For me, however, there was a real problem: I didn’t actually have a ticket.

It wasn’t for a lack of trying. I called MSG in the morning and tried to work my polite and boyish charm while talking to the person on the other end of the line. I wasn’t given tickets outright but was told that if I put in a request they would get back to me via email. The email never came. Eventually, I ran into some friends who were able to secure a ticket from a New York Times critic who had an extra. It pays to know some good people, especially on this particular occasion. This was Dipset versus The Lox, Jadakiss versus Cam’ron, D-Block versus Harlem World, Swizz Beatz versus The Heatmakers. As a native New Yorker, this was like seeing the Knicks in the Finals. It would have been a crime to miss out.

For those born outside of the five boroughs, some backstory. The Harlem rap group the Diplomats, a.k.a Dipset, have had a whirlwind of a career. Led by Cam’ron, Juelz Santana, and Jim Jones, they were a part of Puffy and Mase’s Harlem World scene in the late Nineties and joined Roc-a-Fella Records in the early 2000s. Dipset was equal parts weird, rebellious, and musical. Cam’ron knew how to make lines like “drinking sake on a Suzuki in Osaka Bay” roll off the tongue with a cool ease that nobody can replicate. As such, Dipset made Harlem stand out from the rest of New York. 2003’s Diplomatic Immunity, released under Roc-a-Fella, contains “I Really Mean It,” a song that defines the Dipset era with its swagger and laidback defiance. Dipset were unabashedly funny, dark, and amusing in the weirdest way possible. Whether it was Juelz dressed in Americana like a Harlem Bruce Springsteen or the infamous photo of Cam in a pink fur coat talking on his flip phone, Dipset’s fashion choices sit right alongside their music as reasons why they remain so beloved. If Kid Cudi taught kids how to be weird, it is simply because they weren’t cool enough to listen to Dipset.

The Lox consist of Jadakiss, Styles P, and Sheek Louch. The group started when they were all high school students in Yonkers, and they managed to bring the small city north of the Bronx respect in the rap game. They came onto the scene with something meaner and unique to their neighborhood. Even in the poorest parts of NYC, there’s still a big city mentality. In Yonkers, you are on your own to rot. This is where the Lox honed their grimy street-level raps, and there is real pride that the citizens there take. After signing to Bad Boy Records, the group released 1998’s Money, Power, Respect. It was a good debut album, but it felt like the Lox were being underused by Puffy. The glossy sheen of No Way Out didn’t fit the crew’s more hardened ethos. When the Lox asked to be released from the shiny-suit shackles of Bad Boy Records, their lore only doubled. It was them pushing away from the mainstream and becoming a unique cultural entity with fan bases that have their own code and language. In 1999, Puffy released them from Bad Boy, and the trio joined the audaciously disrespectful Ruff Ryders Records where, along with the late DMX, they’d put out a string of bona fide classics.

Inside MSG’s Hulu Ampitheater, as Michael Buffer announced the two groups to the crowd, Jadakiss looked like he was ready for a heavyweight fight. There was a growl on his face that made him look like Mike Tyson — he wasn’t saying a word, just menacingly staring. While Styles and Sheek were pumping up the crowd, Jada looked like he was a part of their security detail, scanning the surroundings for threats. Opening with “Fuck You,” from 2000’s We Are the Streets, the Lox took a commanding lead early with the crowd. They played mixtape hits and Bad Boy bangers like “It’s All About the Benjamins,” while still taking time to show off each other’s lyrical ability.

Meanwhile, the shit-talking was otherworldly. “I don’t live in Colorado, I don’t live in Miami,” Jada said with ferocity, before going into his classic verse on the Ja Rule cut “New York.” If there was any doubt about who were the better rappers, the Lox put that all to rest last night. Of course, Dipset had their moments. Jimmy doing “We Fly High” was great, but without Max B, it pales in comparison to when the Lox did songs like “Mighty D-Block” and “Dope Money.” 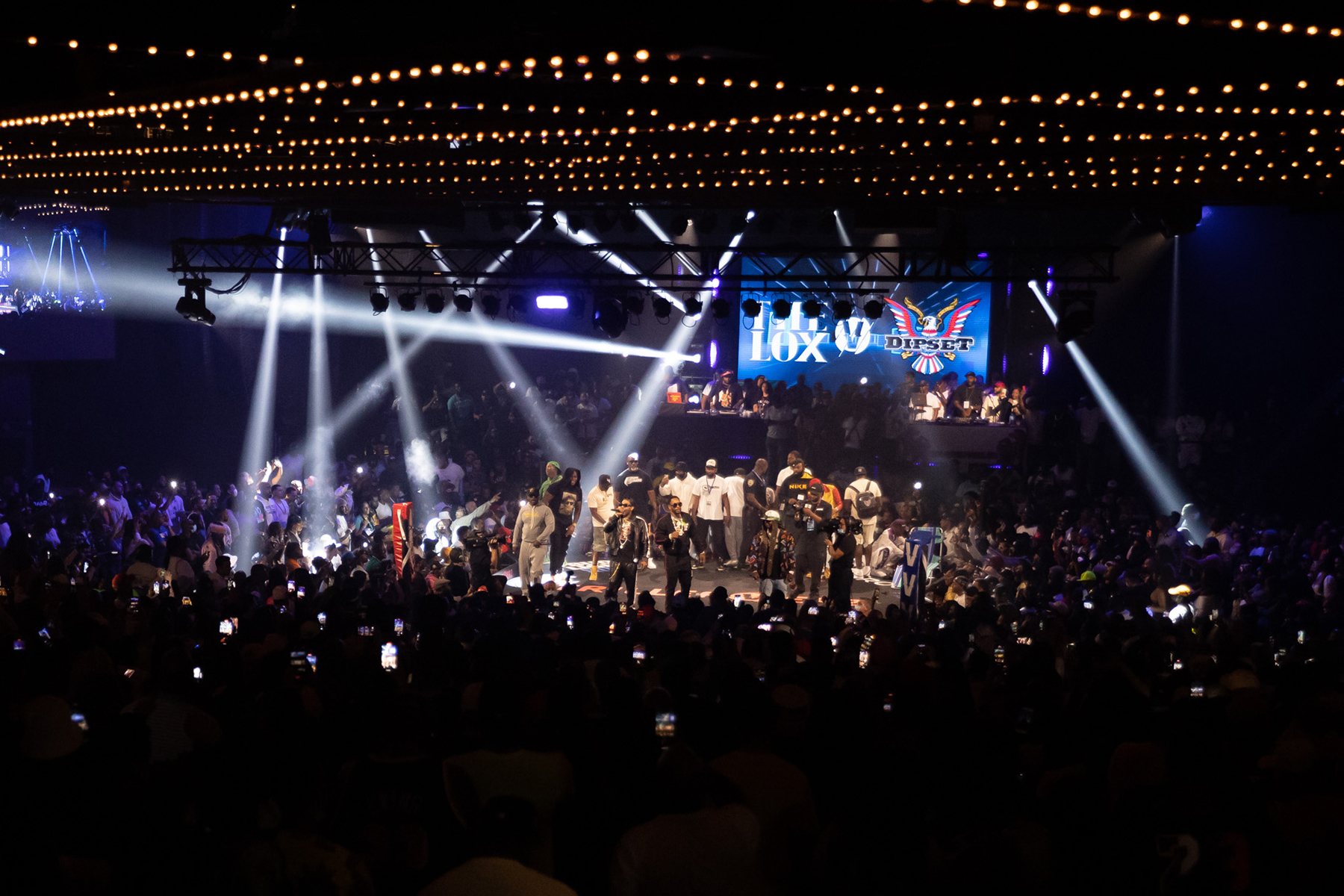 Over the course of the evening, Jadakiss would make quick work of Dipset and prove why he is one of the best New York rappers of all time, dead or alive. He delivered the ferocious “Who Shot Ya” freestyle without breaking a sweat — looking like Biggie with the body of Anthony Mason. He was New York incarnate; on the corner talking shit, punking Juelz by rapping in his face and knocking his patented bandanna off his head.

Continuity proved to be a deciding factor. The individual members of the Lox knew each other’s verses as well as they knew their own. When Styles was rapping, Sheek and Jada were rapping alongside him with the same level of enthusiasm they had for their own work. Dipset looked like a group that were on the outs with one another constantly. Cam was sitting in his beach chair, possessing none of the intensity of his opponents. When you’ve had the career that he’s had, you can afford to do that, but in a Verzuz, it played as not being ready for battle.

In fairness to Dipset, their songs rang out until the end when the Lox just took over. “We Gonna Make It,” which makes a listener think he can do pull-ups on an NYC street pole, was the final blow. Down went Dipset, up went the crowd for the Lox. It was a show-stopping scene from an underappreciated group that finally got their flowers. The tough guys from Yonkers proved to be stronger than the madcap hustlers from Harlem.

What is important about last night is not only veterans getting their due, especially after the passing of DMX, Black Rob, and even the more recent phenom Pop Smoke. It was also a night dedicated to paying respect to rap culture in its birthplace of New York. It wasn’t a nostalgic event: It was an event to show the tremendous importance that hip-hop still holds, the way it brings people together, and why it is a significant part of Black American life. Carmelo Anthony, Fabolous, and Fat Joe were there among other famous New Yorkers. It was an event rap battle born from the streets that spilled into Madison Square Garden. It was exactly what the forebears of the genre thought about when they created it on Sedgwick Avenue.

‘Jeopardy!’ Had To Clarify Its Rules Because A Very Good Champion Has A Very Annoying Answering Habit