As the violet Scion Nebula 86 slams across the finish line at Import Face-Off in Las Vegas this past March, the thundering of Japanese engines is overtaken by the sheer force of the crowd’s screams. The car comes to a stop, enveloped in a cloud of smoke. The driver gets out triumphantly, her arm outstretched towards the stands. For fans of racing, the scene is anything but typical, as the victor, 20-year-old import racer Kaylee Crayton, stands at five-foot-eight and sports wholesome breakfast-cereal good looks; pulling off her onyx helmet as her hair spills over her shoulders as her lips stretched into a high wattage smile. She takes home first place and the title of Best Scion.

She’s one of the women invading the ranks of the male-dominated import car scene, the subculture of modifying or racing Asian and Japanese-import cars. Much of the world was first introduced to the import scene in The Fast and the Furious: Tokyo Drift, a movie mostly set in Japan but almost exclusively shot in Los Angeles. When it premiered in 2006, female participants were mostly a novelty in this underground racing niche. But 15 years after the movie’s release, the movement has gone mainstream, and it’s now common to see women on the track and cruising through car meets. This new wave of female racers, builders, and enthusiasts are taking TikTok to inspire a new generation of girls to get behind the wheel. Indeed, the hashtag #cargirl has over 4.5 billion views on TikTok, and #girlracer has more than 48 million.

One of the most popular accounts, with 1.1 million followers, is Honolulu-based Jasmin Okami, whose pink hair matches the delicate, painted cherry blossoms on her Nissan 370Z NISMO. One of her most popular videos, with over 46.7 million views, shows a passenger point of view of Okami expertly maneuvering her custom gold-flaked gear-shifter with the palm of her manicured hand. It’s captioned “Pov driving in my feels.”

Unlike Crayton, Okami is more of a builder than a racer. Builders focus on modifying their cars for style including wrapping their cars, changing the exhaust, and switching out the rims. “I get messages from girls saying, ‘Oh, you inspired me to build, you inspired me to get a Z, I want to get into cars.’ I was like, yo, that’s so dope,” Okani says. “I’m so proud to be a role model for them and I spend time giving them tips and advice, I love it. I used to just be the girlfriend of the guy with the souped-up car but after I felt the power of having my own ride, I realized that I don’t want to ride passenger anymore.”

Crayton also loves the female import enthusiast community that she found on the app. She started her TikTok account in summer 2020, after the pandemic shut down her tour schedule for the year. It quickly grew to over 470,000 followers. “Having TikTok, I was able to meet many more females in the automotive industry,” Crayton says. “Whenever I sign on, I come across countless female mechanics, painters, and drag racers. I don’t see anything like it on any other social media platform.”  She was first inspired to head to the racing track by her father Danny, a drag racer, and Ali Afshar, a world champion race car driver. At first, it was just for fun, but as it became evident that she had a natural talent for racing, she became obsessed with working on her car to make it as fast as possible. She first got her feet wet racing in a father-daughter drag racing team, and they won several events together before she set off on her own.

Female import enthusiasts are able to connect particularly well on TikTok because of its advanced algorithm. The app serves up an endless feed of curated videos based on the content users have interacted with. Essentially, if you follow, comment, or like just a few import car videos, you’ll be treated to even more viral videos from that genre.

Nadine Hsu, founder of Drifting Pretty, an organization for female import car enthusiasts, says she’s seen young women inspired by #cargirl TikToks — who can’t yet afford their first JDM ,or Japanese Domestic Market car get into racing in any way they can. “In Fontana, California, there’s a speedway with go-karts. So you don’t even need a car or racing license now to go race,” explains Hsu. “These carts go really fast. And this is really the foundation of real racing, because if you can hang go kart racing, then you’ll be more likely to stomach drift racing — an extreme racing sport where the car slides along the track while the front wheels are pointing in the opposite direction of the turn — road racing and things like that. After that, there are many racing schools that supply the car. Anybody can sign up, you just need a driver’s license, it’s incredibly accessible.” 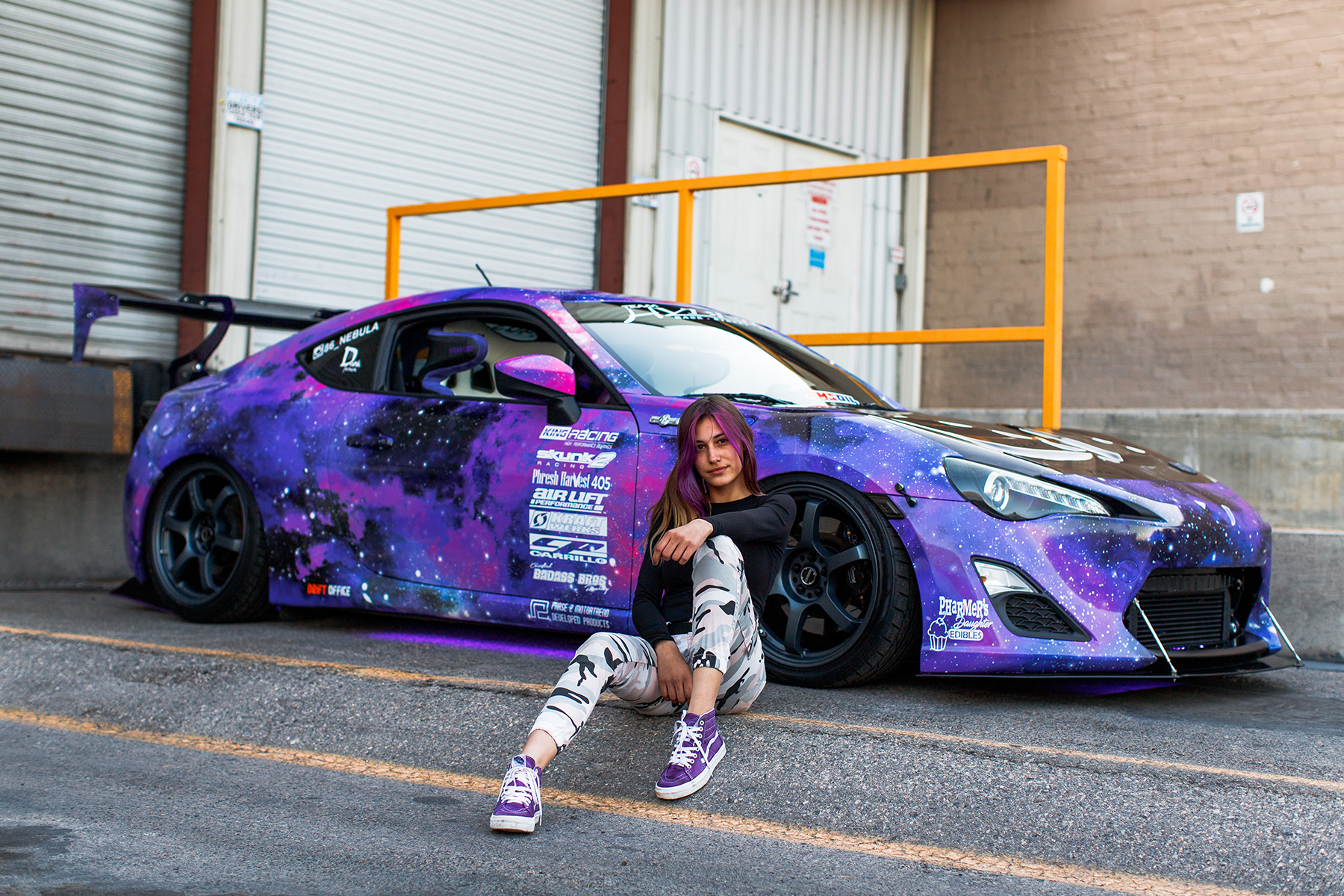 Although there is an outpouring of positivity for female import devotees, an inescapable bias still exists. Okami didn’t expect the amount of hate she would receive for being so visible. “Overnight it was just thousands and thousands of people typing in their opinions, and I was not ready for it,” she says. “Of course, there are more nice comments than hate, but we always take the negative comments more personally.” Import car enthusiast Nhu Tran, whose TikTok showcases the ca-building process of her violet Akuma GR Supra, agrees. “I get so many comments about how it’s not my car,” Tran says, “that I don’t really work on it, that I don’t know anything about car building.”

Instead of fighting back against the trolls, Tran focuses on teaching her audience how to modify their first import car. Many young drivers are intimidated to get started because it can be a pricey habit. “I tell them that I started very small, with a $5,000 Ford Focus, it wasn’t even a sports car. But that’s all the money that I could save up at the time so I started from there and worked towards my goals.” She shares that building out a car is attainable with just a bit of budgeting and planning. “Also, it helps to share your car building process on TikTok,” Tran explains. “Brands started reaching out to me for sponsorships — offering free products in exchange for TikTok videos, which saves me so much money”

Hsu notes that the women in the import scene are especially positive role models. “They’re all pretty, strong, badass women that are doing crazy things with their life,” explains Hsu, “and it all starts with racing. It’s inspiring to see how confident and amazing these chicks have evolved into, because when they first join our organization, many of them are more quiet and awkward. It’s such a trip to see what racing can do for a girl’s confidence and life path.”

For those not yet old enough to drive and stuck at home during the pandemic, they can live vicariously through her Okami’s TikTok videos. One popular video shows a calming view of the ocean as she glides by in her 370Z. It’s captioned, “tilt your phone to the left and enjoy.”

Brands That Are Making the Best Plus-Size Clothing Right Now

An OnlyFans Influencer Was Murdered. Now, Other Models Are Terrified

Is This Giant Hydroponic Greenhouse in Kentucky the Future of Farming?