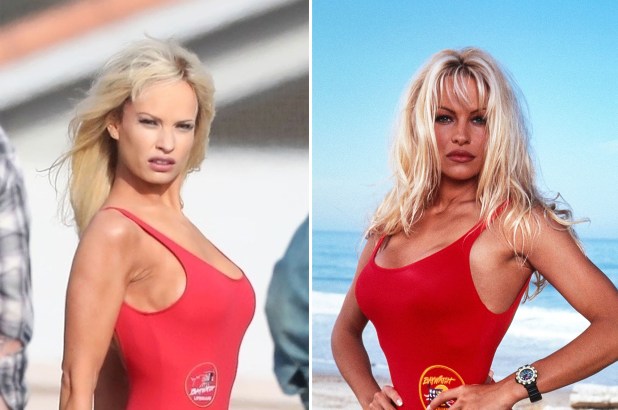 Lily James sat in the hair and makeup chair for three to five hours a day to become Pam Anderson.
BACKGRID; Everett Collection

Lily James has been raising eyebrows and having fans do a double-take whenever she posts transformation photos from her upcoming Hulu miniseries “Pam & Tommy.” The British actress is starring as blonde bombshell Pamela Anderson and the resemblance is truly uncanny.

Barry Lee Moe, hair department lead for the series, revealed to Variety that it took “anywhere from three to five hours of hair and makeup every morning before we even started filming.”

The limited series also stars Sebastian Stan as Anderson’s ex-husband Tommy Lee, alongside Seth Rogen, Taylor Schilling, Andrew Dice Clay and Nick Offerman. Filming was completed on July 30 and will chronicle the marriage of Anderson, 54, and Lee, 58, as well as the unraveling of their infamous sex tape. The series is “hopefully coming out in February [2022].”

“We ended up using 25 wigs in the end. Everyone from Seth Rogen to Nick Offerman, Taylor Schilling all wore wigs because we transform them into new characters,” Moe continued.

He added, “Sebastian is the only one who doesn’t wear a wig.” Stan, 38, grew his hair longer for his role as the heavy metal drummer. “We had a keratin treatment done, and we colored it every few weeks,” Moe added.

The Mötley Crüe member and the “Baywatch” star filmed their sex tape on their honeymoon in 1995. It was later stolen and made the rounds online and the former couple later filed a lawsuit against the tape’s distributor, Internet Entertainment Group. Anderson explained on “Watch What Happens Live” in 2015 that she didn’t make any money off of the explicit video.

“I’ve never seen it. I made not one dollar. It was stolen property. We made a deal to stop all the shenanigans,” the Canadian native said at the time.

While fans have been in awe of James’ transformation, Anderson’s bestie Courtney Love blasted the miniseries in May. In a now-deleted Facebook post, the 57-year-old wrote: “I find this so f–king outrageous. When Pam / Tommy sex tape was out / myself @pattyschemel @xmadmx were making a record. And the lone women in many recording studios in la … Where all / ALL! The staff engineers / producers / owners / were watching the sex tape with huge schadenfraude . . Guffaws, It was disgusting. I banned anyone discussing it. It destroyed my friend Pamelas life. Utterly.”

“And shame on Lily James whoever the f–k she is,” Love concluded, adding, “#vile.”