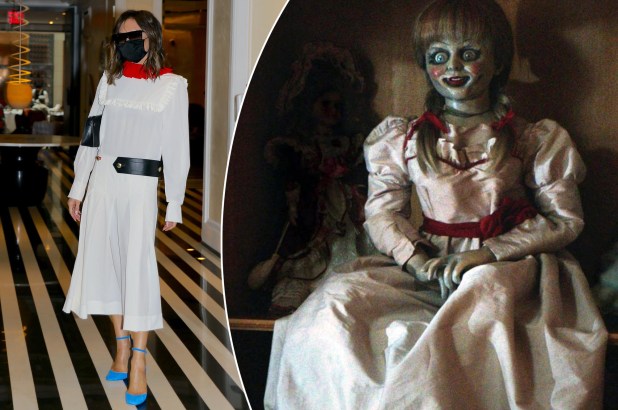 Victoria Beckham, 47, shared a snap of herself in the Ruffle Detail Pleated Midi Dress ($1,890) from her fashion line on Tuesday — but the reaction wasn’t quite what she expected, with many comparing her look to that of the terrifying doll from “Annabelle.”

“One of my favourite New York looks is now available at victoriabeckham.com and in our Dover Street store! @davidbeckham loves it too,” she captioned the shot, editing in her husband saying “ooh la la” behind her.

However, more people said “AHHH!” than “ooh” at the style, which features a red removable collar, white ruffle yoke and a black leather belt extending halfway around the waist.

“The beginning of the first slide, I thought it was the Annabelle doll,” one fan commented, comparing the style to the puff-sleeved dress worn by the horror flick’s titular character.

“Is that you Annabelle???” asked another, while a third wondered if Posh Spice was embracing her scary side, writing, “It’s like a high fashion Annabelle.”

Others found the pleated dress more dystopian, writing that it “looks like a scene out of the Handmaid’s Tale” and “looks like a straight jacket dress with a mock turtleneck underneath.”

Beckham paired the polarizing dress with a black face mask, sunglasses and a Hermès Pochette Kelly mini bag for her day in the Big Apple.

She added a pop of color to the look with bright blue suede pumps from her line ($553), which many commenters saw as a redeeming quality.

“Great shoes shame about the rest,” said one, as others added, “Love those shoes!” and, “Shoes please.”

While many felt the designer’s latest look was worthy of a horror film, at least it didn’t include Crocs, the style capable of sending shivers down Beckham’s spine. Justin Bieber recently sent her a pair from his collaboration with the brand, prompting her to reply, “I’d rather die.”

On Pandemics, Climate Change, and Finding Humor Amid the Doom

Lukas Nelson Looked Up and Inward During Lockdown. He Found His Best Album Yet