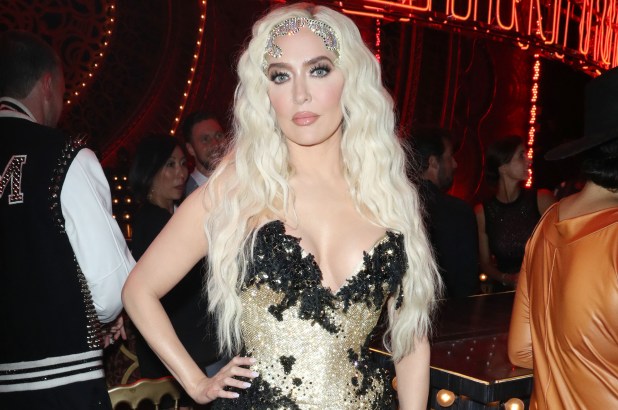 Erika Jayne went on a Twitter tirade following Wednesday night’s “Real Housewives of Beverly Hills” as fans continued to muse over whether the reality star knew about her estranged husband’s alleged illegal activity.

“Y’all dumb bitches with the conspiracy theories will keep at it alll night,” she wrote, adding in a separate tweet that she “will not be stopped” and will not be stepping away from the show despite her mounting legal trouble.

“Stop thinking I’ll quit just because you think I should. F–k that,” Jayne, 50, wrote.

During the latest episode of the Bravo series, the ladies gathered for a dinner party that quickly went downhill when Jayne’s co-star Sutton Stracke said she wanted to distance herself from Jayne after she and Tom Girardi were sued for allegedly embezzling money meant for the families of victims of a plane crash, whom were represented by the now-disgraced lawyer.

Stracke continued to push Jayne to admit whether she knew what was going on, but Jayne has remained steadfast she had no knowledge of Girardi’s alleged actions.

“You’re trying to accuse me of lying, and I’m not a liar,” Jayne told Stracke. “Do you know something about my life that I don’t? If you do, speak up. I’m very interested to know. Look at me. I’ll go head-on with you all f–king day. I’m telling the truth. I am not a liar. You have a lot of f–king nerve.”

While Stracke continues to question Jayne, she does have some “Housewives” on her side.

“Real Housewives of Potomac” star Karen Huger – whose husband ran into tax problems in 2017 – said in July, “I do believe Erika didn’t know because I didn’t know. When you’re married, it doesn’t mean that you know everything your husband is doing in business.”

Kyle Richards tweeted that she has, “never known Erika Jayne to be a liar.”

Lisa Rinna also stood up for Jayne, saying on an August episode of “Watch What Happens Live with Andy Cohen,” “I don’t think she knew anything…Why would Tom Girardi tell Erika anything? The lawyers didn’t even know.”

In August, Jayne was sued by the bankruptcy case’s trustee for allegedly knowing that the $25 million she spent on her American Express bill, glam squad, assistants, and PR companies came from Girardi Keese.

The Rundown: It Is Now A Settled Fact That Santa Claus Exists In The ‘Ted Lasso’ Universe