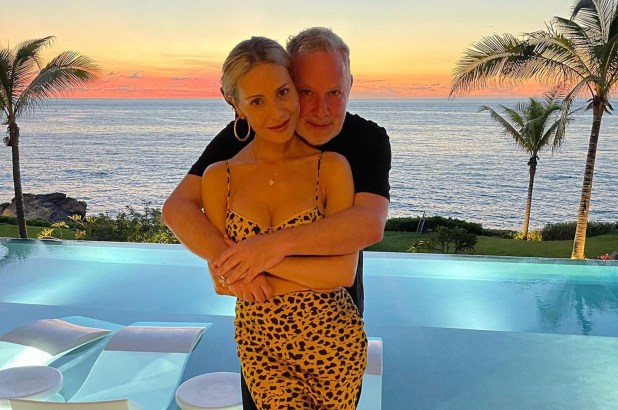 Dorit and Paul “PK” Kemsley have been married since 2015.
Instagram

Erika Jayne isn’t the only “Real Housewife” finding out that life can be just a little too “XXPEN$IVE.”

The “RHOBH” star — who often dresses in head-to-toe designer duds — rounds out the debt with her own individual tax lien from March 2021 that states she owes the State of California $90,269.46.

In September, the married couple — who share two young kids together — put their Encino, Calif., mansion on the market for $9.5 million, but it has reportedly been reduced to $8 million.

Dorit and PK have both been previously entangled in a series of lawsuits involving their finances.

The British businessman won a 2019 sports betting case brought by a collection agency that said he owed a sports gambling firm $75,000 because the case was brought past the statute of limitations.

He and Dorit then also settled a lawsuit with the Bellagio hotel in May of that year.

The casino first filed a case against PK in 2013 for failing to pay a $3.6 million casino marker that he took out, and alleged that after the music manager filed for bankruptcy in the U.K., he stopped making payments. He was then ordered to pay until June 2018, however both parties later “resolved their differences,”

In 2019, it was reported that Dorit’s bank accounts had been frozen due to her husband’s legal troubles. However, the “Housewife” dismissed the claim on “Watch What Happens Live” in July of that year, stating it had all been “blown up” in the press.

On this week’s episode of “RHOBH,” Dorit told her co-star, Jayne, that she knows what it’s like to be thrust into her husband’s “legal woes.”

Jayne is currently being accused of divorcing her 82-year-old husband, Tom Girardi, in an attempt to hide assets and embezzle money. She has denied any wrongdoing.

Reps for Dorit and PK did not immediately return Page Six’s requests for comment.

R. Kelly Trial: Opening Witness Claims ‘He Was Going to Train Me to Please Him Sexually’