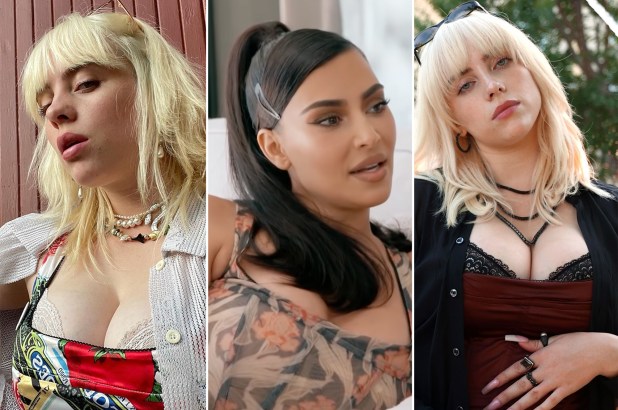 When it comes to snatched style, celebrities can’t stop snatching up these corsets.

Billie Eilish celebrated the release of her new “Happier Than Ever” album in a sexier-than-ever outfit this weekend, going for a dressed-up dip in the pool wearing a brown satin “Campbell” corset from Miaou ($225).

It’s not the first time she’s tried the silky style, as the 19-year-old Grammy winner posed for selfies in a tomato-printed version earlier in the month, pairing the distinctive design with a white lace bra.

The bustier-bra combo is becoming a go-to for Eilish in her new era, as she’s been ditching her signature oversized outfits in favor of more skin-baring styles.

But she’s far from the first star to sport the form-fitting ‘fit: Sophie Turner snapped a mirror selfie in a white flowered version last fall, pairing the piece with equally sleek leather pants.

Amelia Hamlin is also hooked on the look, having teamed a black “Campbell” corset with leggings in January.

And as with any sexy style, Kim Kardashian is keeping up with the trend, too. While filming an episode of “Keeping Up With the Kardashians” this spring, she donned a floral-printed “Campbell” top ($225) with a matching miniskirt ($125) from the brand.

While corsets are a centuries-old classic, the look has been enjoying a recent resurgence, thanks to stars like Kardashian.

And Netflix’s smash-hit “Bridgerton” — of which the Skims founder is famously a fan — further tightened corsets’ hold on modern style this year, with Kardashian even scoring an invitation to an on-set fitting.

Celebrities are especially in love with Miaou’s versions; Kylie Jenner, Ariana Grande and Emily Ratajkowski have all been spotted in various bustier tops from the brand.

And since these designs feature a zipper rather than an elaborate lace-up closure, sporting the classic style has never been more of a cinch.