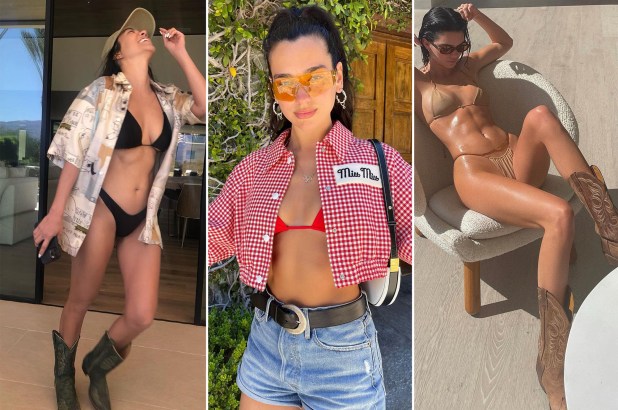 Kourtney Kardashian, Dua Lipa and Kendall Jenner are declaring it a “cowgirl summer” with their boot-and-bikini pairings.
Instagram

Forget flip-flops: These stars are hoofing it to the pool in cowboy boots.

As the weather heats up, celebrities like Kourtney Kardashian, Kendall Jenner and Dua Lipa are giving us big shoes to fill with their country-inspired summer style.

And although her footwear may seem more suited to riding horses than riding waves, the Poosh founder’s far from the first major name to pair boots and bikinis recently.

Her sister Jenner, 25 — who has worn Western footwear with everything from floral dresses to denim — is perhaps the biggest famous fan of the unlikely summer pairing.

The star first dipped her toe in the trend in March, sharing an Instagram Story dancing in a red bikini, jeans and her beloved boots.

The self-proclaimed “horse girl” doubled down on the look in April, showing off her abs by the pool in a beige bikini and the very same shoes.

It’s no surprise the Kardashians are holding the reins on this footwear fad; we also have the famous family to thank for the recent rise of velour swimwear and “underboob” bikinis.

Although stars including Megan Thee Stallion and Noah Cyrus have also paired skin-baring looks with cowboy boots in the past, it remains to be seen whether they’ll be giddying up to the beach or pool in the same shoes.

But with summer just starting, it’s safe to say stars won’t be giving this trend the boot anytime soon.

The Top 5 Moments of ‘Rolling Stone on Twitch’ (So Far)

Back to His Place! Jennifer Lopez Spotted at Ben Affleck’s Brentwood Home as Romance Heats Up