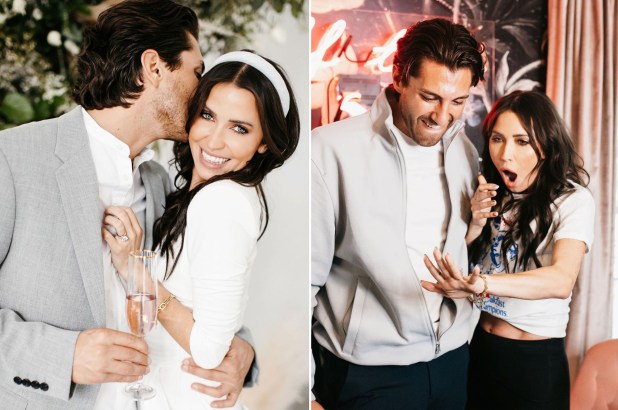 She received her final rose.

Tartick, 35, popped the question on Monday in Nashville, Tennessee, while the couple — who have been dating since 2019 — were recording an episode of Bristowe’s “Off the Vine” podcast.

“It was everything I could have asked for,” Bristowe, also 35, gushed to Entertainment Tonight. “The words that came out of his mouth were insanely beautiful. We’ve never locked eyes like that in our lives. We were holding hands, so intense, and I was listening to his every word, but still blacked out.”

Bristowe explained that she thought she was interviewing a guest for her show when Tartick proposed with a 5.09-carat ring from Paris Jewellers.

The pair both announced the happy news on Instagram on Tuesday with photos taken by Stephanie Sorenson.

“Choosing your forever is the most important decision in the world, @kaitlynbristowe you made that decision so easy! Love you to death and forever,” Tartick captioned a series of photos.

In January 2019, Bristowe and Tartick announced they were dating after first meeting on her podcast. They moved in together in May of that year.

“We’re at the next step in our relationship where we want to grow even more and we can’t do that long distance,” Bristowe said on “Off the Vine” at the time. “Cheers to new roommates! I can’t wait to see what things you do that drive me nuts.”

The couple have already been through a lot with both testing positive for COVID-19 last Christmas.

Last March, ABC announced that Bristowe and former “Bachelorette” Tayshia Adams will co-host the next season of the hit reality series. They will be taking over for Chris Harrison who stepped down after he was criticized for defending Rachael Kirkconnell’s past racist actions.

Cha-Ching! The Richest ‘Shahs of Sunset’ Cast Members Ranked by Net Worth

Can Britney Spears Sue Her Father for Conservatorship Abuse?

From Margot Robbie to John Cena: Stars stun at ‘The Suicide Squad’ premiere

Here’s Everything Coming to Netflix in March