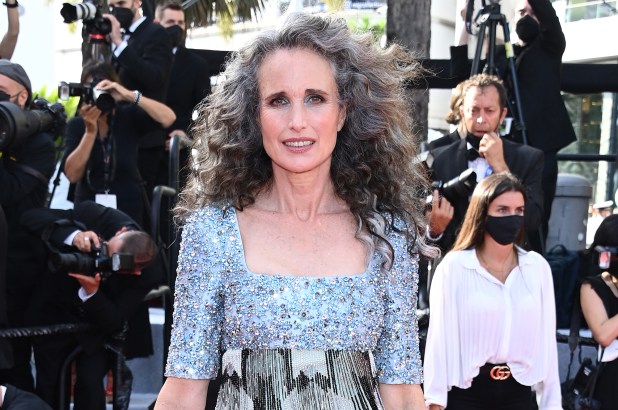 At the Cannes Film Festival premiere of “Annette” earlier this month, all eyes were on Andie MacDowell and her gorgeous new gray curls.

But believe it or not, the 63-year-old “Groundhog Day” star encountered pushback from her team before the headline-making hair transformation.

“My managers had actually said to me, ‘It’s not time [to go gray],’” MacDowell told Vogue.

Because she “didn’t want anybody to be upset,” the actress continued, she even spent some time trying to figure out how she could disguise her graying hair with wigs “to please people.”

But in the end, she decided to simply follow her gut and embrace her silver strands, telling her team it was a “power move.”

“Once I did it, it was just so clear to me that my instincts were right because I’ve never felt more powerful,” she shared. “I feel more honest. I feel like I’m not pretending. I feel like I’m embracing right where I am. I feel really comfortable. And in a lot of ways, I think it’s more striking on my face. I just feel like it suits me.”

MacDowell said that the seed for the style switch-up was planted during the pandemic, when she was social distancing at home with her family.

“At the very beginning of quarantine, my hair started growing and every time my kids would see me, they kept telling me I looked badass with my gray hair. When I pulled it up in a bun, all you could see was the salt and pepper, which is what I am, you know, dark and silver,” she recalled.

“I like to compare myself to George Clooney because why not? I’ve been saying for a while now it was time for me, personally, to make that transition because I felt like it was appropriate for my personality and just who I am.”

Now proudly silver-haired, the star said she wants to continue to fight Hollywood’s double standard when it comes to aging.

“I don’t want people to have the expectation that I need to look younger to have value or to be beautiful or desirable,” she explained. “We don’t do that to men! We love an older man. We love men as they age. I would love the same expectation for women, and we’re getting there … you know, baby steps.”

Kathy Hilton once called security when Nicky borrowed her diamonds

How Laura Whitmore juggles Love Island, taking care of her skin and being a new mum