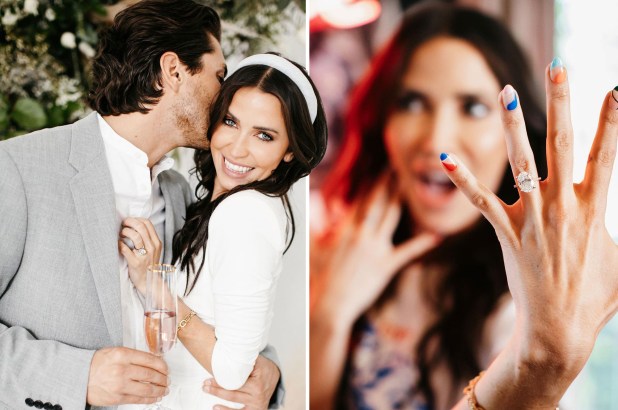 Bachelor Nation’s Kaitlyn Bristowe and Jason Tartick are engaged, and we’ve got all the details on the bride-to-be’s engagement ring.
Steph Sorenson Photography

“Bachelorette” no more: Kaitlyn Bristowe is headed down the aisle.

The Canadian reality star, 35, is engaged to fellow Bachelor Nation favorite Jason Tartick, who popped the question on Monday with a 5.09-carat oval-shaped engagement ring.

“Jason was wonderful to work with and he cared deeply about creating the perfect ring for Kaitlyn. He knew that he wanted an oval diamond, with the most important aspect being that the ring reflected Kaitlyn’s personal style,” Chau Lui, co-owner and director of operations at Paris Jewellers, told Page Six Style.

“We are such fans of Kaitlyn — she is from our hometown of Edmonton!  She has a very fun, edgy style, and I noticed that on many special occasions she chose to wear lace. I thought it would be very fitting of her personal style to include intricate lace-inspired details in the ring.”

Lui — whose company is gearing up to launch its Eternal line of luxury engagement rings — added that Bristowe’s sparkler was crafted from rose gold with platinum prongs, each of which was studded with three diamonds to represent the couple’s past, present and future.

“It is a true privilege to have someone trust you with the process of creating their engagement ring,” she said. “The reaction online has been unbelievable. It has been such an honor for our Vietnamese-Canadian company and the entire team; we are just so grateful.”

Both Rare Carat CEO Ajay Anand and Mike Fried, CEO of The Diamond Pro, told Page Six Style they estimated the rock’s value at around $500,000.

And the bride-to-be certainly approves. “I love it, it’s perfect. I’ve been staring at it all day,” Bristowe gushed to ET.

“Luckily I got my nails done the day before, but these are some funky nails!”

The couple began dating in January 2019, after first meeting on Bristowe’s podcast, “Off the Vine.” Fittingly, Tartick popped the question while the pair were recording an episode of that very podcast.

Snoop Dogg, Dr. Dre, And Swizz Beatz’s Sons Are All Starring In A Movie Together

David S. Goyer Reveals ‘Man Of Steel’ Happened Because He Couldn’t Figure Out The Ending To ‘The Dark Knight Rises’

Danielle Busby Gushes Over Husband Adam in 15th Wedding Anniversary Tribute: ‘I Am in Awe’