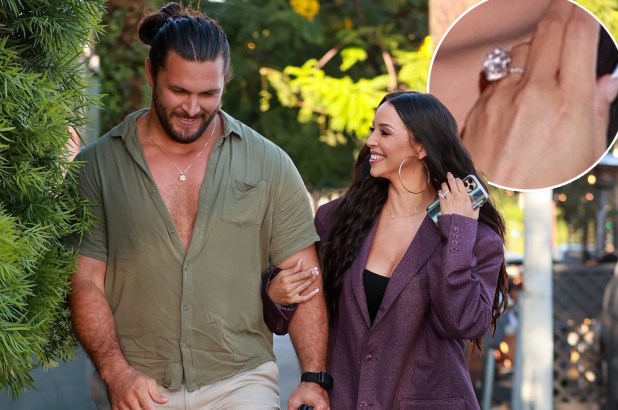 The 36-year-old reality star sparked engagement speculation on Tuesday, when she was spotted wearing an enormous ring while out to dinner at Craig’s in Los Angeles with fellow “VPR” castmates.

Davies proposed with a 12.74-carat rectangular cushion-cut rare fancy pink morganite ring at their Los Angeles home, under an arch of gold and white balloons, according to People.

The enormous sparkler was designed by Kyle Chan, who is also responsible for tons of “Vanderpump” bling, including Brittany Cartwright’s engagement ring from Jax Taylor, Katie Maloney’s second ring from Tom Schwartz and more.

Shay isn’t the only Bravolebrity to rock a pink morganite ring on her left hand; “Real Housewives of Potomac” star Juan Dixon popped the question — for the second time — to ex-wife Robyn Dixon in December 2019 with a double halo version.

“We walk in, we sit down at my kitchen island, and he gives me this beautifully printed, typed-out letter,” Shay told People of the proposal.

“I’m not even three words in and I’m bawling. It was like our whole love story … And then all of a sudden like a f—king wizard magician, he bends down and pulls out this huge bouquet of flowers.”

The rugby player then led her out to their balcony, where a “Marry Me” sign was set up under the balloon arch.

Shay, who was married ex-husband Michael Shay on the Bravo show in 2014 and later divorced in 2017, also revealed that the couple’s “dream” is to wed in Bali, though they have not yet set a date or begun planning.

The ‘Captain America: The First Avenger’ Writers Have Finally Answered Whether Steve Rogers Is A Virgin In The MCU

Marvel Fans Were Thrilled To See ‘What If…?’ Completely Revamp A Villain (After T’Challa Became Star-Lord)

Keyshia Cole’s Mom Frankie Lons Dies on Her 61st Birthday: Get to Know the Singer’s Family