The producers of the 2021 CMT Music Awards were clearly paying attention. After a year-plus national conversation about equity, diversity, and, yes, racism, Wednesday night’s CMT Awards made a clear attempt to be inclusive, devoting airtime to artists and personalities of color.

Instead of putting all of their effort into one token set piece or presentation, the show highlighted a diverse group of black voices throughout the broadcast. There was the superb black vocal group the Shindellas opening the awards with Lady A. There was Blanco Brown playing the spoons into a commercial break. And there was Breland and Mickey Guyton turning heads with their remarkable mash-up “Cross Country.” Names like Linda Martell, the recipient of the Equal Play Award, were also introduced to a mass audience.

While we would have liked to have seen the CMTs acknowledge June as LGBTQ Pride Month (especially after former CMT Awards host Kid Rock doubled down on a homophobic slur on Twitter a few hours earlier), the production was an admirable step forward in country music’s ongoing evolution.

Here are five moments of diversity that caught our attention.

Gladys Knight Bridges Country’s Future With a Plea for Friendship

The CMT Awards did a good job of featuring not just a diverse group of established performers, but giving new artists a chance to prove their talents as well. Nowhere was that more evident than with the segment featuring Breland, who got to perform his soaring, biographical song “Cross Country” with Mickey Guyton and show off his considerable vocal range. Guyton was in top form as usual, and their collaboration rolled into a fiery throwdown with legend Gladys Knight, whose “Midnight Train to Georgia” deserves to be recognized as a straight country-soul classic. In this case, Knight, Breland, and Guyton took on the 1969 rave-up “Friendship Train,” which has a stirring message of unity for a world about to go up in flames. Somehow, it’s a message that — no offense — just hits different when it’s not coming from Tim McGraw and Tyler Hubbard.

Linda Martell’s Legacy Gets Its Due

Linda Martell was recognized with CMT’s Equal Play Award on Wednesday, owing to her status as the lone black woman to have charted a solo single inside the country Top 20. Her follow-ups didn’t fare as well amid shifting label priorities, and she essentially retired from the music business. Her story was retold with an intro by Mickey Guyton and a video package featuring Rissi Palmer (whose Apple Music Country show Color Me Country is named in honor of Martell), Rhiannon Giddens, Jennifer Nettles, Darius Rucker, and Carrie Underwood. It was a loving, long overdue tribute to a true country music pioneer who didn’t get a fair shake.

We honored Linda Martell this year at the 2021 #CMTawards with the CMT Equal Play Award for being a trailblazer for artists of color in country music. Congrats from CMT and @seeherofficial! #SeeHer Hear Her pic.twitter.com/nMcvpNfaPh

Guest performers on country awards shows can be hit-or-miss, but CMT hit a bullseye when it paired ace singer-guitarist Chris Stapleton with ace singer-guitarist H.E.R. The latter was making her country awards show debut, but is a bona fide star with Grammy nominations and numerous contemporary R&B and hip-hop hits including “Focus,” “Damage” and “Could’ve Been.” The two joined together for a thrillingly loose rendition of H.E.R.’s 2020 single “Hold On,” their two mighty voices wrapping around one another in a way that felt instinctual and their sizzling guitar licks shooting sparks in all directions. The inspired combination dared to ask the question: Why shouldn’t fans of H.E.R.’s music enjoy Chris Stapleton and some of his country peers, and why shouldn’t Stapleton’s fans do likewise? Either way, someone needs to release this collaboration immediately. (And, CMT, book them for Crossroads.)

CMT didn’t just use its performer lineup to broadcast diversity. The producers also meticulously curated the show’s hosts and presenters. Kane Brown, a mixed-race country star, co-hosted for his second year, this time with Kelsea Ballerini. Mickey Guyton emceed the moving tribute to pioneering black country singer Linda Martell. And Gladys Knight handed out the award for Female Video and blew the roof off the place with a performance of “Friendship Train.” But it was the presentation of Video of the Year that best illustrated how CMT is reading the room and looking forward. Anthony Mackie, the black Captain America star of Disney’s The Falcon and the Winter Soldier, made his CMT Awards debut to give the trophy to winners Carrie Underwood and John Legend — TV’s biggest superhero handing out the night’s biggest award. 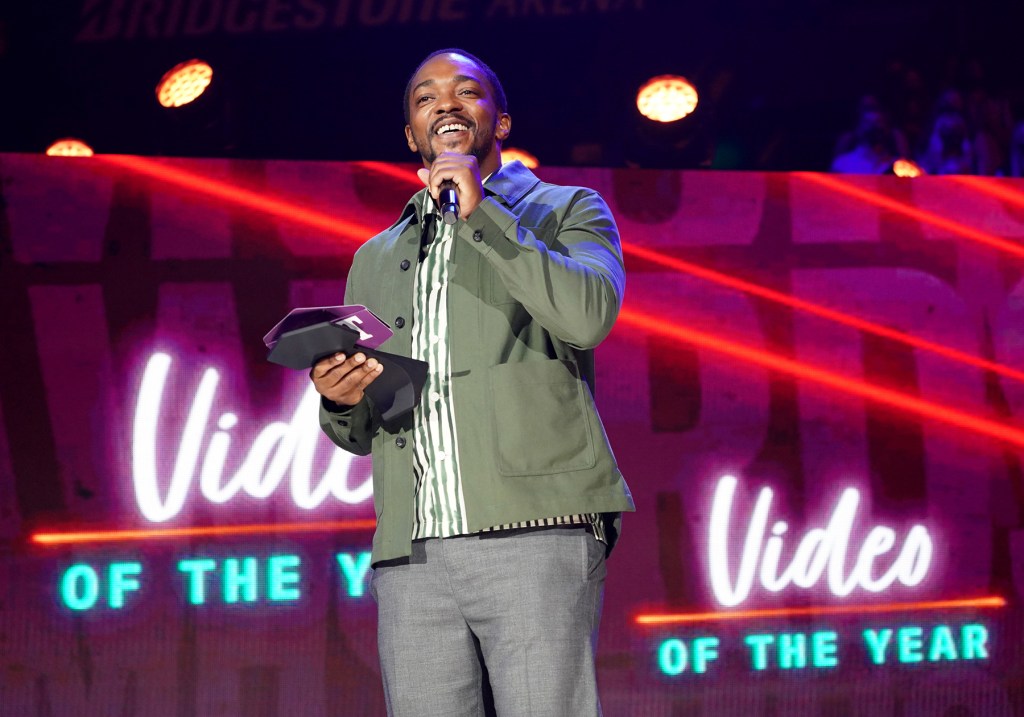 Lady A Cede the Spotlight

The country trio Lady A misstepped last year when they didn’t realize their new name was already in use by a black performer, but the band smartly chose to cede much of the spotlight to underrepresented voices in their high-profile show-opening performance of “Like a Lady.” Instead of their usual Nashville dude players — including singer Hillary Scott’s husband on drums and the unmistakable Slim Gambill on lead guitar — Lady A recruited an all-female band to share the stage: vocal group the Shindellas on harmonies; Juno on guitar; Catie Offerman on fiddle; Rebecca Lynn Howard on bass; and Elizabeth Chan on drums. Fellow country performers Carly Pearce and Lindsay Ell made cameos too. It was girl power on a national stage, a visible showing that underscored the song’s uplifting message.

Kevin Nealon Tells A Hilarious Story About… A Thief Breaking Into His House And Stealing Garry Shandling’s Ashes?